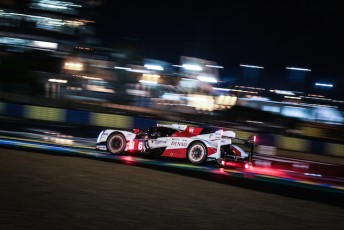 Toyota remains on course to record an historic Le Mans 24 Hour victory after remaining in the lead two-thirds of the way into the sports car classic.

As dawn broke, the #6 Toyota Gazoo Racing TS050 Hybrid managed to thwart a challenge from the #2 Porsche 919 just past the halfway mark.

Toyota responded to the challenge following a stirring stint by Romain Dumas in the polesitting #2 machine.

Porsche has flirted with the lead a few times however Toyota has struck back each time.

Shortly after Lieb pitted and handed over the controls to Romain Dumas which allowed the #6 Toyota to regain the lead.

In what was developing into a tantalising showdown, less than 30 seconds separated the top three cars headed by Toyota’s #6, with the #5 Toyota driven by Kazuki Nakajima moving into second ahead of the #2 Porsche with Neel Jani replacing Dumas at the helm.

After both its cars have been dogged with issues, Audi fills fourth and fifth with its #8 and #7.

The #1 Porsche 919 was forced into two long pit stops when mechanics had to change the water pump which tumbled it toward the back of the pack. With Timo Bernhard aboard it has climbed to 38th but is 38 laps in arrears of the leaders.

An angry Simon Dolan was disgusted at being assisted into the barriers in the #38 G-Drive Gibson Nissan with the incident including the #98 Aston Martin being investigated into the 16th hour.

Another tight battle continues in GTE Pro with the Risi Competizione Ferrari 488 of Toni Vilander holding a slight advantage over Sebastien Bourdais in the #68 Ford GT.

GTE Am was being lead by Jeffrey Segal in the #62 Ferrari 458 from David Heinemeier Hansson in the #88 Dempsey-Proton Porsche 911 RSR.