SVG: I felt bad beating up on my old car

SVG: I felt bad beating up on my old car 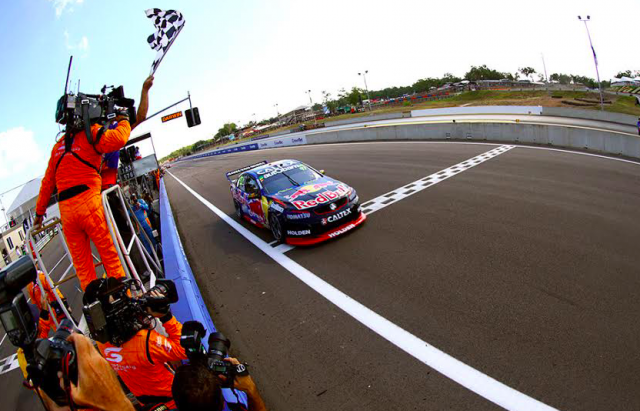 A moment of pitlane aggression from Shane van Gisbergen proved critical in his Race 13 victory at Hidden Valley.

Van Gisbergen became the first driver to win at two different circuits this season by backing up his victory from Symmons Plains in April.

Although starting from pole, the opening lap was far from simple for the Kiwi as he lost out to Todd Kelly off the line and then dropped to eighth by running wide at Turn 5.

Pitting with the rest of the field under Safety Car at the end of the opening lap, Van Gisbergen found the fast lane blocked by Will Davison.

The Tekno Holden was parked waiting for Craig Lowndes to take service in the pit bay that the two teams share.

Refusing to be delayed, Van Gisbergen applied a series of nudges to the Darrell Lea Commodore in order to create a gap big enough to reach his pit.

The move allowed the Kiwi to rejoin the track fourth, which quickly turned to second when Todd Kelly and Mark Winterbottom clashed at the restart.

“The pitlane was crazy and Wilbur (Will Davison) didn’t do very well at getting out of the way,” said Van Gisbergen of the chaos.

“I don’t know if he had enough room or what he could have done but I felt bad beating up on my old car.”

Van Gisbergen capitalised on a small mistake from Lowndes at the second restart but was unsure as to how the fuel battle between the pair would play out.

“I did everything I could to shake him but he had the equal of us and probably a little bit better,” said Van Gisbergen of the battle with Lowndes during the middle stint.

“I was very surprised to come out (of the second stops at half distance) in front.

“Once we knew we were the leader with no threats just managed the tyres to the end.”

Lowndes was also told that he had a fuel advantage over Van Gisbergen as he filed into the lane directly behind the Red Bull Holden.

“The radio call was that we had more fuel onboard than Shane,” confirmed Lowndes.

“We sort of shadowed him for a long time expecting to try and leapfrog him through the pits but we dropped together (off the jacks).

“From that point on we were trying to shadow him and of course then Timmy (Tim Slade, eventual second place finisher) popped in between us.”

Lowndes and Van Gisbergen sit second and fifth in the championship respectively after 13 races, trailing team-mate and leader Jamie Whincup.