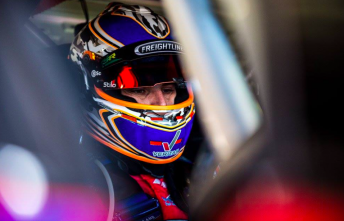 Tim Slade has escaped penalty for contact on the opening lap of Race 12 that resulted in a spin for Craig Lowndes.

Supercars Investigating Officer Jason Bargwanna declared the tangle a racing incident due to the tight nature of the first lap battle.

Slade made contact with the rear of Rick Kelly at Turn 5, which in turn shunted the Nissan into Lowndes’ Holden.

The Triple Eight Holden subsequently spun, creating chaos for the rest of the field behind.

“There was no doubt that Tim Slade made a little bit of contact with the back of Rick Kelly, but that sort of thing goes on right throughout every first lap,” explained Bargwanna to Fox Sports.

“In a first lap when there is a bit of push and shove and cars are making contact all over the place, sometimes it goes wrong.

“What I’m looking for is to say ‘is someone being careless? Is there a breach of our rules?’

“Sladey did make the contact but I’m going to say it’s a racing incident.”

Bargwanna also declared no breach of rules in a lap seven incident between Cameron Waters and Fabian Coulthard.

Contact between the pair damaged the front suspension of the Prodrive Ford, resulting in a trip through the gravel at Turn 10 and a lengthy stop for repairs.