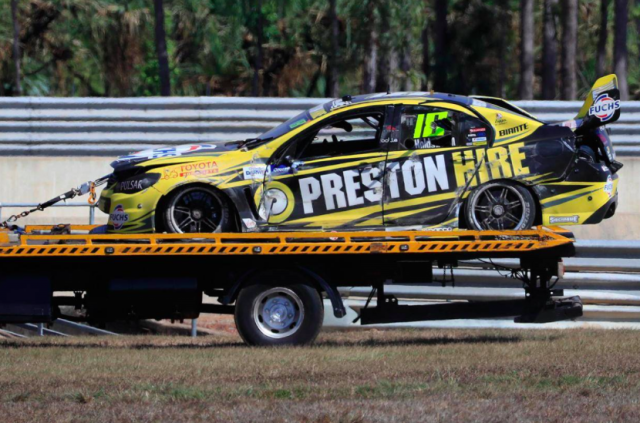 Holdsworth’s Holden being retrieved from the crash scene

Holdsworth suffered a fractured pelvis in the shunt, which team owner Charlie Schwerkolt expects to sideline the driver for four to six weeks.

“First and foremost Lee is our biggest concern and I’ll be joining him at the hospital as soon as we’ve packed everything away here.

“It’s a big blow to the team with where we’re sitting. It’s no good for the team or our sponsors. I’m absolutely gutted.”

Despite heavy side-on contact with the exposed concrete, the Triple Eight-built chassis has been given the all-clear to be repaired.

Instead of returning to its Melbourne base, Team 18 will now head to Queensland in order to undertake the necessary fix.

The car was the first Car of the Future chassis built by Triple Eight in 2012 and raced just once in the team’s hands as the Xbox wildcard the following year before being sold to Schwerkolt for 2016.

“It’s obviously hit really, really hard on the passenger side which has bent the roll-cage hoop and front tower,” explained Schwerkolt.

“We won’t go back to Melbourne, we’ll strip the car down at Paul Morris’ and repair it at Cepi’s (Paul Ceprnich’s Pace Innovations, which designed the control COTF chassis).

“Cepi, Triple Eight and V8 Supercars have all looked at it. It’s a big repair, but it’s definitely repairable.”

Schwerkolt will have to sort a replacement driver ahead of the July 8-10 Castrol Edge Townsville 400.

Holdsworth’s Pirtek Enduro Cup co-driver Karl Reindler, who has already driven the Holden during test and practice sessions, is considered the leading candidate.

“We’ve got to look at everything and make a decision.

“The obvious one is Karl but we haven’t spoken to him as yet.”

Although declaring the touch from Jason Bright that triggered the crash as a racing incident on a busy first lap, Schwerkolt hopes the circuit will reassess the wall that Holdsworth impacted.

Bare concrete was installed on the run from Turn 1 to 5 ahead of last year’s event, replacing the previous earth-filled tyre barrier.

“It’s a shame there’s no tyres there that can soften the blow,” noted Schwerkolt.

“It nearly got to the point of the wall (where it turns with the circuit) the way it’s shaped.”