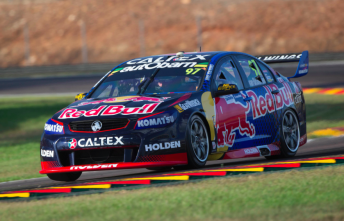 Shane van Gisbergen says he can only blame himself for a restart penalty that saw the Red Bull Holden black flagged from the lead in Race 12.

Van Gisbergen’s eagerness had included minor contact between the pair at the exit of the final corner as Caruso waited to accelerate.

The #97 Commodore eventually came home 16th, squandering his team’s first pole position of the season earned earlier in the day.

“It wasn’t the best start but I held second and on the restart I just misjudged the line and passed before the line,” explained Van Gisbergen.

“(There’s) no one to blame but myself. We had a fast car today and didn’t make the most of it so I’m pretty annoyed at myself but will hopefully back it up tomorrow.

“The car is really good so we’ve got to keep up with the track tomorrow and we should start up the front again.

“The car is amazing and we made some good headway this weekend so I’m feeling really good in the car. (It was) just a silly mistake by myself.”

After breaking a seven-year drought with victory, Caruso said he remained calm and confident as the messy restart unfolded.

“I just tried to keep a cool head,” he said.

“I knew what my car was capable of today and from early on I just wanted to race my race and that was quite evident after we pitted.

“We were able to put a few laps down and that gave us the opportunity to win the race.”

The slow restart saw the front-runners bunched especially tightly on the way to the line.

Sixth placed Scott Pye was tagged by Jamie Whincup amid the scramble, with the DJR Team Penske Ford lucky to escape without major damage as it grazed the inside wall.

Six-time champion Whincup, who went on to finish second, believes that the timing of the Safety Car’s exit from the circuit contributed to the mess.

“Every time we don’t release the Safety Car early enough or it doesn’t enter pitlane before the first car exits the last corner there’s always a drama,” he said.

“We saw the green flag, we all went. I went down the inside of Scotty Pye who shut the gate and it almost turned him around in a straight line.

“That could have been massive. It was all going on.”