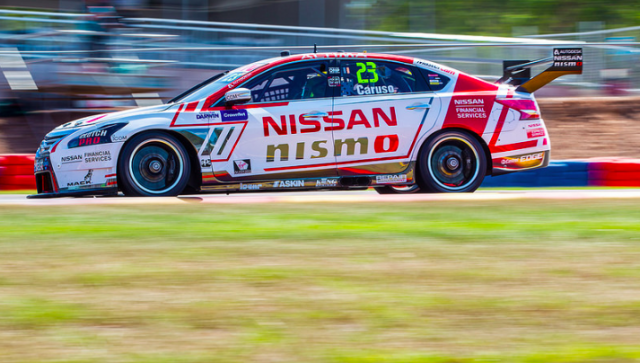 The result comes seven years after Caruso’s first and only previous victory, also scored at Hidden Valley, and is Nissan’s second win in the Supercars era following success at Winton in 2013.

Caruso had out-dragged Van Gisbergen to lead at the first corner, staying clear of the chaos that was to unfold behind.

The pack was shuffled at Turn 5 as seventh placed starter Craig Lowndes spun following contact with Rick Kelly, who in turn had pressure being applied from Tim Slade behind.

One of the biggest beneficiaries was Garth Tander who charged from 25th to 16th on lap one, but losing his right-front door along the way resulted in a Safety Car and a trip to the garage.

The subsequent restart provided the race’s flashpoint as Van Gisbergen made minor contact with Caruso exiting the final corner before sneaking down the inside of the Altima before the control line.

Caruso was one of the first to stop when the pit window opened on lap 10, while Davison waited a further five laps before taking service.

When the front-running stops shook out Caruso had a comfortable three second lead over Mostert with Davison third and Jamie Whincup fourth.

Whincup picked off Davison on lap 24 and Mostert 12 laps later before closing Caruso’s margin to just 1.8s at the flag.

Pye had been fortunate to escape without significant damage from the restart, which saw the Shell Ford scrape the inside wall after a touch from Whincup.

Van Gisbergen was five places further back after his drive-through penalty.

The results see Whincup jump from third to the head of the championship, now holding an 18 point lead over erstwhile leader Winterbottom.