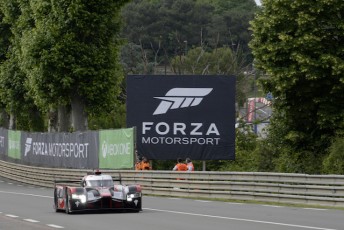 Andre Lotterer put Audi on top in a truncated warm-up session as the weather finally started to clear at Le Mans.

Lotterer put in a best tour of 3.25.88s after squeezing in seven laps in the R18 e-tron quattro, the most running out of the 60-car field.

Kamui Kobayashi was next best in the #6 Toyota with a 3.27.12s lap ahead of the pole-sitting #2 Porsche 919 Hybrid of Marc Lieb with both managing just four laps each.

The first stoppage in the 45-minute session saw Paul-Loup Chatin (#23 Panis Barthez Competition Ligier-Nissan) collect the barrier at the Porsche Curves after slipping up on an oil trail which brought out the red flag.

The session restarted with 22 minutes remaining but it wasn’t long before the race director called another red flag.

With 10 minutes remaining David Cheng made a big impact with the wall after catching standing water on the inside of the Indianapolis corner in the #35 Alpine Nissan which saw a premature end to the warm-up.

The #1 Porsche driven by Brendon Hartley was among 23 cars which did not post a timed lap.

Rain is forecast to return for the start of the race at 2300 tonight (AEST).