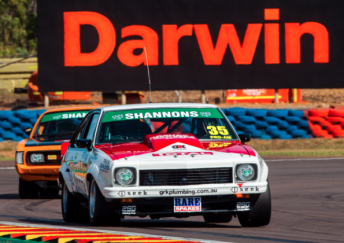 Jason Gomersall has reset the practice record as he topped both Touring Car Masters practice sessions at Hidden Valley Raceway.

John Bowe followed by Glenn Seton enjoyed spells atop the timesheets early on during the second 20 minute session.

However, Gomersall took over the lead just before the halfway mark as he snipped 0.0026s off Bowe’s existing record.

The A9X Torana had spent most of the opening practice session on top, his reign was only briefly interrupted by Bowe during the second runs.

Seton ended the day second overall ahead of Bowe and Steven Johnson, the latter having been hampered by a power steering problem during Practice 1.

Andrew Fisher provided the only notable incident during the day’s running, sliding his XY Falcon off the road at the Turn 9/10 complex late in Practice 2.

Myles Bond and Brendon Pingel both spent time at the head of the field before being usurped by the Millennium Building Group entry midway through the 20-minute session.

Proceedings were brought to a premature end when Brad Eastman’s car blew an engine and came to a halt on the circuit.

Phillip Island round winner Kel Treseder failed to set a time when his engine expired on his first lap.

Qualifying and the first two of four 12-lap races will be held tomorrow from 0920 local time.

His VP Commodore led a quintet of Over 2 Litre class entries and the Commodore Cup car of Dunlop Supercars Series driver Bryce Fullwood in sixth.

The local support category resumes with Race 1 from 0850 local time on Saturday.