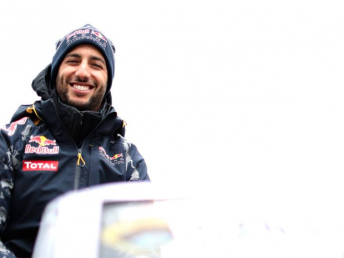 Daniel Ricciardo is expected to remain at Red Bull Racing for at least another two seasons.

The Australian has reportedly agreed to prolong his stay at the Milton Keynes operation until the end of the 2018 campaign.

Red Bull is yet to officially confirm the contract extension however the 26-year-old told reporters in Baku ahead of this weekend’s European Grand Prix that he will drive for the outfit next year.

Ricciardo has been operating under a performance based contract with reports suggesting Red Bull has now opted to take up its option on the Western Australian.

As a result, he is now expected to line up alongside Red Bull’s latest F1 protege Max Verstappen next year.

Although linked with a possible move to Ferrari, Ricciardo told Speedcafe.com in March that he expected to stay at Red Bull next season.

“The contract was always long term and in a way it was always that length,” Ricciardo confirmed to Sky Sports F1.

“But it’s performance based and obviously Helmut (Marko), the Red Bull advisor who is the right-hand man of owner Dietrich (Mateschitz) and the team are happy with what l am doing and happy with me and Max (Verstappen) and want to keep us on board.”

Ricciardo remains confident that Red Bull can deliver him a car to fight for the 2017 world championship.

“At the moment this looks like being the best place to be,” he added.

“If Mercedes don’t make changes there is nowhere else that looks that attractive. With the rules next year, l think it’s going to be a strong fit and l hope we can really fight for a title in 2017.”

Ricciardo will be in action later today when opening practice begins for the European Grand Prix at 1900 AEST.