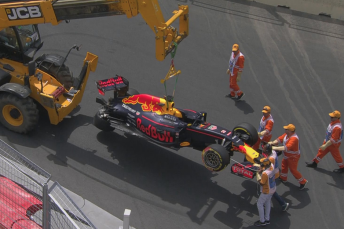 The Red Bull driver slid wide on the entry to Turn 15 which resulted in a slow speed collision with the barriers, bringing out the red flags in the maiden Formula 1 session at the Azerbaijani venue.

Ricciardo escaped the crash unscathed although his RB12 sustained heavy damage to the right rear.

The Australian ended the session in 13th position.

The 6km circuit has attracted criticism from drivers prior to this weekend’s European Grand Prix due to its lack of run-off areas at certain points of the track.

Several drivers were caught out by the circuit resulting in excursions down escape roads, while Lewis Hamilton brushed the wall at Turn 3.

Hamilton topped the times despite sitting out the final 30 minutes of the session after he flat spotted his tyres following the brush with the wall.

The reigning world champion was 0.3s quicker than Mercedes team-mate Nico Rosberg with the Williams of Valtteri Bottas in third.