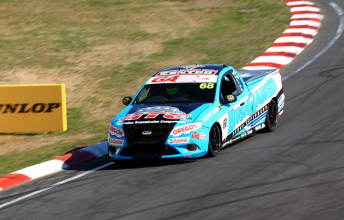 Reigning series winner Ryal Harris will contest the remaining rounds of the V8 Utes season as a replacement for Kris Walton.

The three-time V8 Utes winner has been drafted in to drive a Bushranger backed Peters Motorsport Ford FG campaigned by Walton in the opening four meetings of the season.

Harris has struggled for funding this season which forced him to withdraw from the championship after the Clipsal 500 opener.

Since Adelaide, the Gold Coast driver has been competing in an Erebus Motorsport run Mercedes in the Australian GT Championship.

Harris will make his competitive V8 Utes return at the Castrol Edge Townsville 400 from July 8-10.

“I’m pumped to get back in and have a steer of a V8 Ute. I’m going to be rusty as all hell but I’m sure it will all come back to me pretty quickly,” said Harris.

“It’s exciting to have a major sponsor and to just concentrate on driving.

“I am very much looking forward to the challenge of having two quick team mates, it makes you push that little bit harder, I’m confident I can come in and get some great results for the team and Bushranger.”

Team principal Rod Dawson has acknowledged Walton’s efforts, who has won two races in the Bushranger entry this season.

“It’s been a great ride for both the team and Kris and we have certainly had a great deal of success,” said Dawson.

“We have loved the way Kris races. His ‘take no prisoner’ driving and will to win has pushed the team, and together we have accomplished many goals including our first championship win since 2002.

“However, nothing stays the same in sport or business and the whole team is enthusiastic to have Ryal join us and our other drivers will be keen to be racing in equal equipment against the benchmark in V8 Ute racing.”