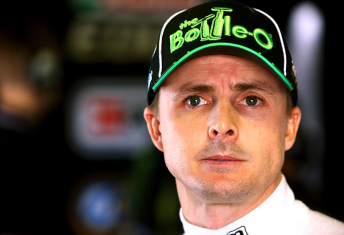 Prodrive and Triple Eight’s dominance at Hidden Valley in recent years has no guarantees of continuing this weekend amid the most competitive season in history, believes Mark Winterbottom.

Supercars’ two powerhouse teams are unbeaten at the Northern Territory circuit in the last 11 races stretching back to 2011.

Although expected to perform strongly at the high grip Hidden Valley track, an unprecedented nine different winners from seven teams in just 11 races sees no shortage of challengers.

Reigning champion Winterbottom heads to the CrownBet Darwin Triple Crown leading the points standings having scored one victory this season.

“The way the season is going it is hard to read,” four-time Hidden Valley race winner Winterbottom told Speedcafe.com.

“It is definitely open this year. Previously there have been only a couple of teams that have won races. Anyone can win this year.

“The Penske cars are obviously pretty quick and (Tim) Slade’s car at Winton was unbelievable.

“You roll up and expect to beat someone and they turn around and dominate it. There is no form guide at all.

“We are in the right spot. It’s nice to be defending the title in a good way. There is a lot of racing to go but we are going ok.

“It (Hidden Valley) has always been a good track for me in the past but you can’t guarantee it is going to give you a good result.”

Triple Eight’s Jamie Whincup echoes Winterbottom’s sentiments with the six-time champion admitting he has never faced such a wealth of challengers.

“It has always been cut-throat but not involving so many people,” Whincup, who is third in the standings, told Speedcafe.com.

“I have had some serious battles with FPR (PRA) and HRT but there has never been so many challenges.

The break between the last round at Winton and Supercars’ trip north has seen Prodrive complete the build of a new chassis for Winterbottom to debut this weekend, while Triple Eight conducted a test day.

Winterbottom successfully shook down his latest Falcon FG X at Winton last week and is eagerly awaiting an opportunity to race a new car for the first time in two and a half years.

“It seems pretty good so I‘m looking forward to seeing what that does for us,” he added.

“The shakedown was really good. It was wet so I’m not able to say it is half a second faster but it should be easy for the guys to tune and work on.

“It (the car) has got a bit of pressure to live up to the previous one.”

Meanwhile, Whincup feels his squad has made gains from its test day at Queensland Raceway last week.

“We learned more than we thought on the day once we got back and looked at the data. Things really are started to make sense,” added Whincup.

“Darwin has been kind to us in the past but we had a real bad one last year so we have got some work to do.

“We will go there confident that we can do a good consistent job and see what everyone else brings to the table.”