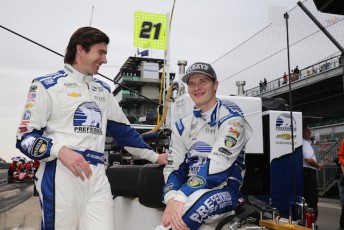 Ed Carpenter Racing has signed JR Hildebrand to replace Josef Newgarden who suffered shoulder and hand fractures in a nasty crash at Texas.

Hildebrand will handle the #21 Chevrolet at the next round at Elkhart Lake, Wisconsin, on June 26 and remain on call until Newgarden recovers from his injuries.

The 28-year-old Hildebrand made his fifth start for Ed Carpenter Racing when he finished sixth at the Indianapolis 500 recently.

He is scheduled to test with the squad at the Road America circuit this week along with Spencer Pigot.

“Fully expect my dude @josefnewgarden to be back at it in no time, but will fill in with @ECRIndy until then,” Hildebrand tweeted.

“Obviously not ideal circumstances, helps to know (Josef) & team. Now we see how good of friends we are when I start calling to review his data.”

Newgarden’s crash occurred on Lap 42 when he was taken out by Conor Daly.

The race was later red flagged and abandoned after 71 laps when when rain hit the track, forcing IndyCar officials to re-run the 248-lap race starting from Lap 72 on August 27.