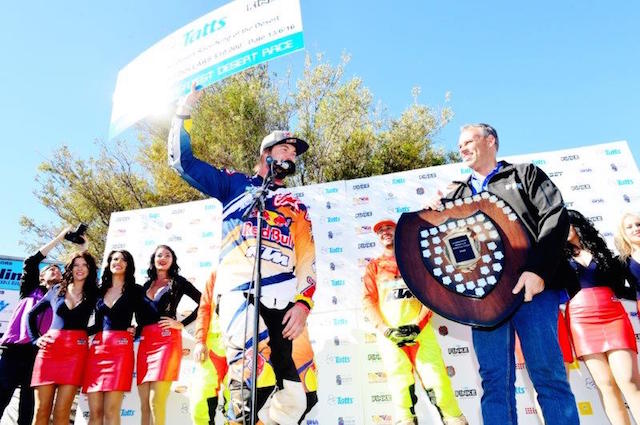 Offroad legend Toby Price has fallen one place short of pulling off a unique bike/car double in the Tatts Finke Desert race.

Price valiantly sliced his way through the field to finish second in the car class behind first-time winners Glenn Owen and Mathew Ryan. 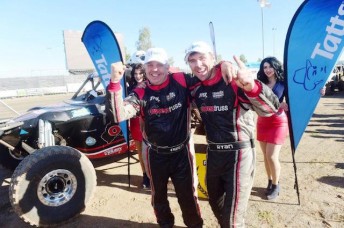 Price, who came out of his 19th road position at the start, made solid progress through the final 226km, running fifth at the Mt Squires checkpoint before moving to fourth through Bundooma and Rodinga.

He then worked his way into third past Deep Well before slotting into second behind the eventual winners.

Price then flew back to Finke to jump aboard his Red Bull KTM 500 EXC before beating fellow KTM rider Tye Simmonds by almost three minutes with David Walsh, on another KTM, in third.

Price, who started the year with a brilliant win in the Dakar Rally in South America, has now recorded five consecutive wins in the Finke.

“I don’t know if I can do it again,” Price told the ABC of the gruelling double duty.

“That’s what we think now but maybe I will wake up in the morning and we will have a whole new aspect on it.

“It wasn’t a double but we were not too far off.”

Among the withdrawals in the car/buggy class were former winners Brad Gallard/Scott Modistach in the #454 Gesier Brothers Trophy Truck 3500cc and Shannon and Ian Rentsch in the #1 Jimco buggy Nissan 3500cc.

The 2015 winners Shannon and Ian Rentsch started in seventh from Finke but failed to make the first checkpoint at Mt Squires.