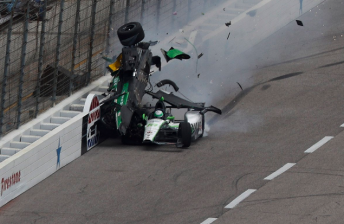 The accident was triggered on lap 42 when Conor Daly lost control and collected Newgarden.

Daly has since offered his unconditional apologies to Newgarden for causing the frightening crash.

“Lost more ‘side force’ than thought with my buddy @josefnewgarden on my right rear. Couldn’t catch it. Hate it for my team and his,” Daly later tweeted.

Newgarden was helped from the car by safety workers but then collapsed on the track before being airlifted to Parkland Memorial Hospital.

The rain delayed event that was initially scheduled for Saturday night, was then red flagged after 71 of the 248 laps when a rain storm lashed the track.