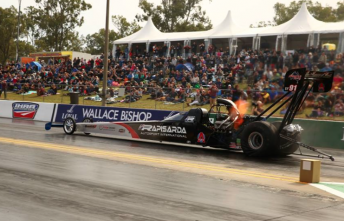 The American star driving for Rapisarda Racing enjoyed an impressive run to the final which included the fastest side-by-side pass recorded in Australia.

Dixon posted a 4.527s run at 332.92mph to defeat Western Australian Damien Harris to book his place in the final.

The final proved to be an anticlimax as Newby was forced to abort his run, handing Dixon the victory on his return to the Australian drag racing scene for the first time in three years.

Dixon stopped the clock at 4.915s while recording a speed of 257.04mph which was his slowest of the meeting.

New South Wales racer Mark Belleri came out on top in the Pro Slammer category as he saw off a challenge from Queenslander Ben Bray.

Belleri clocked a winning pass of 5.795s reaching a speed of 243mph.

Nine-time Top Doorslammer champion John Zappia exited the competition in the semi-finals with a loss to Bray.

Phillips and fellow finalist John Cannuli collided halfway through the pass. Luckily both drivers walked away from the incident unscathed.

However, Phillips was awarded the win after Cannuli was disqualified for crossing the centreline.