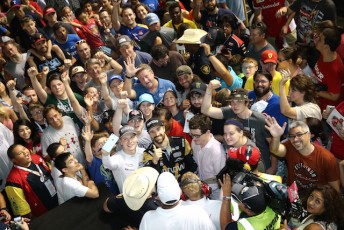 The Firestone 600 IndyCar race at Texas has been postponed following a day of rain in the Fort Worth area.

While the rain stopped in the early evening, officials tried for several hours to dry areas with its fleet of jet dryers to make the track raceable for the scheduled night race.

However high humidity at the Texas Motor Speedway hampered the efforts.

The 248-lap race has been rescheduled for 2.15pm (local time) tomorrow.

Ahead of the announcement to abandon plans to proceed, many of the IndyCar drivers took to the grandstands to sign autographs for the loyal fans who remained hopeful the race would start.

The delayed race is the third IndyCar race that has been postponed at TMS following a rained out race in 2000 which was rescheduled for the following day and the September 15, 2001 event that was ultimately run on October 6 following the 9/11 terror attacks.