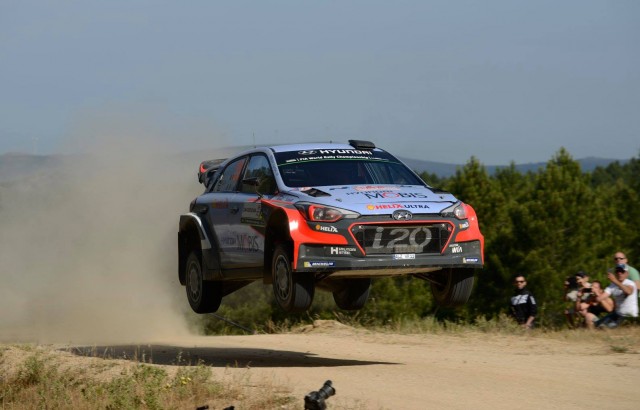 Neuville was the class of the field all weekend

Thierry Neuville has kept a cool head on the final day of Rally Italia Sardegna to bring his Hyundai i20 World Rally Car home in first place.

After a frustrating start to the year, which saw just the one podium at the opening round in Monte Carlo. The Belgian had experienced a range of mechanical and driver related issues over the following events.

Like his Hyundai team-mate Hayden Paddon in Argentina, Neuville put a complete event together and was rewarded with his second career win. The last coming in Germany in 2014. He also became the fifth different event winner of the year behind Sebastien Ogier, Jari-Matti Latvala, Paddon and Kris Meeke.

Coming into the final day with a 16.1-second lead over Volkswagen’s Jari-Matti Latvala, he finished the event with a 24.8 second victory. Ogier came home back in third.

“For the second time it’s much less pressure leading the rally all the time,” said Neuville.

“I really enjoyed it and had a great weekend. Great things come to those who earn them.

“I want to dedicate this win to (the late) Phillipe Bugalski, as it would have been his birthday today. He was my mentor and I owe a lot to him.

“The feeling was good in the car this weekend and hopefully it will be like this for the rest of the season.”

The final TV stage went the way of Ogier, ahead of Hyundai youngster Kevin Abbring and Latvala.