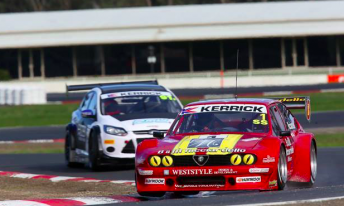 Jack Perkins’ impressive winning streak in the Kerrick Sports Sedan Series finally came to an end amid a busy day of Shannons Nationals action at Winton.

Entering the weekend undefeated in a dozen races, pole-sitter Perkins added another win to the tally in the opening heat.

The Audi-Chev then broke an axle on the warm-up lap of Race 2, which was subsequently won by Tony Ricciardello.

The final race saw Ricciardello score another victory and, after storming through to second, Perkins again retired with driveline trouble.

Ricciardello (255 points) now leads Perkins (165) by 90 points heading into the next round at Queensland Raceway in late July.

The GT3 and MARC V8 machinery took a win apiece in the Australian GT Trophy Series.

A commanding performance from Greg Taylor in the opening race saw the Audi driver take victory by 49s over Nick Rowe in the leading MARC Mazda V8.

Third in Race 1, Rowe’s team-mate Jake Camilleri went on to win the second race, passing Rick Mensa for the lead shortly after the compulsory pitstops.

A Safety Car just as the pit window opened bunched the field, dropping race leader Taylor down the order through his longer stationary time.

Mensa emerged as the leader once the green flags flew, though the Porsche was under attack from Camilleri.

The pair were locked in combat for a number of laps before a decisive move at Turn 3 saw Camilleri take control of the race.

Jack Smith in another of the MARC V8s managed to drop Mensa to third on the final lap.

The round honours in Trophy Class went to Taylor, while Camilleri was the top MARC entry courtesy of his consistency.

Hamish Hardeman backed up his maiden GT3 Cup Challenge win on Saturday with a pair of wins in today’s sprint races.

The flashpoint of the weekend came during the opening corners of Race 2, where minor contact between Hardeman and Evans sent the latter into a spin.

Evans retired from the race after taking subsequent damage as he sat broadside across the circuit.

Although Evans recovered to second in the final, Hardeman now leads the series heading to the next round at Sydney Motorsport Park on July 1-3.

Jake Klarich cemented a strong weekend with a second and a third in the respective Sunday races, while Jim Campbell took Elite Class honours.

Tim Macrow again proved the class of the Formula 3 field today at Winton, adding a further two wins to his Saturday triumph.

The only accolade that didn’t go Macrow’s way was the outright lap record, which was taken by second place finisher Chris Anthony in the feature race.

Anthony’s 1:14.3754 on the recently resurfaced layout finally eclipsed the fastest Formula Holden time at the venue from 2001.

Top Radical SR3 runner Peter Johnston completed the weekend podiums, extending his lead in the Radical standings in the process.