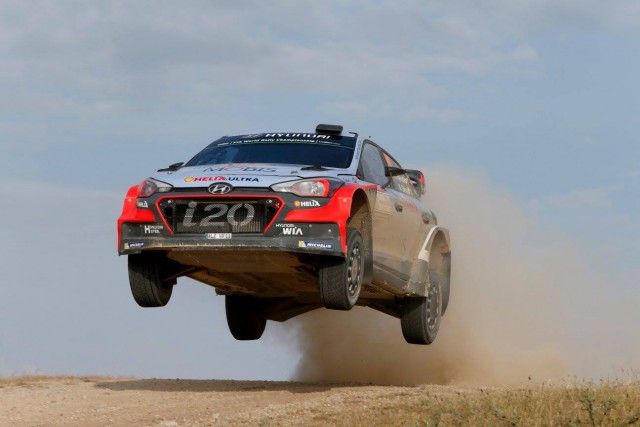 Neuville holds the lead heading into the final day

Thierry Neuville has continued to show the form of the Hyundai i20 World Rally Car building his lead over a long day at the Rally Italia Sardegna.

Volkswagen’s Jari-Matti Latvala reduced Neuville’s Friday night lead to less than three seconds during the morning stages, but the Belgian took two of the afternoon’s three speed tests to rebuild his lead to 16.1sec at the end of the day.

High temperatures, rocky gravel roads and heavy rain presented a tough challenge in a day which contained more than half the event’s distance and Neuville was up to it.

“The car was amazing to drive in slippery conditions,” said Neuville.

“We’ve had another good day and it was a pleasure to fight Jari-Matti. Tomorrow will be tough but we’ll prepare properly and continue fighting.”

After a strong morning, Latvala did not get sucked into an all-or-nothing fight as Neuville excelled on the long 44.26km Monte Lerno test.

“I can’t do better than that. I did a really good run and if Thierry is faster then respect to him,” said Latvala.

“I was a bit too careful earlier this afternoon, but sometimes you have to play safe.”

Championship leader Sébastien Ogier was 58.9sec adrift of Latvala in third. As road opener he endured the worst of the conditions, cleaning the dry gravel off the surface to leave better grip for those behind.

Less than four seconds covered Ogier, Mads Ostberg and Andreas Mikkelsen after the morning. However, the pressure was off later in the day when both Scandinavians retired to leave Ogier over a minute clear of Dani Sordo.

Mikkelsen was first to go, exiting fifth with a broken track control arm on his Polo R after hitting a rock. Then Ostberg parked his Ford Fiesta RS near the finish of the final stage after clipping a rock and breaking the front right suspension.

Haydon Paddon did not restart after yesterday’s crash while Hyundai team-mate Kevin Abbring celebrated the first stage win of his career before a double puncture and gearbox problems slowed him.