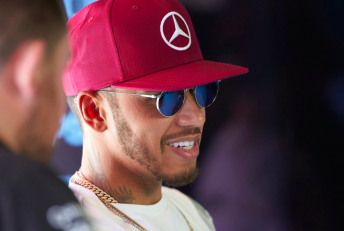 Lewis Hamilton backed up his victory in the Monaco Grand Prix by topping both practice sessions at Montreal.

The Mercedes driver recorded a 1:14.7s on Pirelli’s super soft tyre in the opening hit-out before lowering the benchmark by a further 0.5s on the ultra soft in the afternoon.

Armed with an upgraded turbo this weekend, Sebastian Vettel gave hope to Ferrari with second fastest for the day, just 0.25s adrift of the three-time world champion.

Points leader Nico Rosberg was a further 0.25s adrift in third having trailed Hamilton by 0.3s to be second in Practice 1.

As expected, the low downforce Montreal layout proved particularly challenging for Red Bull, which had proven highly competitive at Spain and Monaco.

Max Verstappen beat team-mate Daniel Ricciardo in both sessions, with the pair ending the second session almost a full second off the front-running pace.

Valtteri Bottas was sixth after a day that saw Williams forced into a major rebuild on Felipe Massa’s car.

The Brazilian crashed heavily at Turn 1 in the opening session when his DRS failed to properly deactivate in the braking zone.

Massa emerged unscathed and, with his car repaired, managed 13th fastest in the second 90 minutes of running.