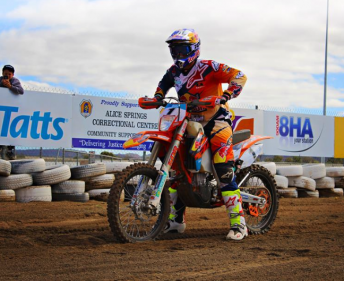 Dakar champion Toby Price has made the perfect start in his attempt to equal the most wins in the motorcycle class in the Tatts Finke Desert Race.

His lap of the 8.3km course gave him an eight second margin over Alice Springs rider Daymon Stokie on a Honda CRF 450R.

It was another Honda that tied for third fastest, with Jacob Smith on the #4 Honda CRF 450R and Tye Simmonds (KTM 500 EXC) registering identical times.

Earlier Price had completed the Prologue in the Geiser Bros Trophy Truck Chev 6000cc alongside co-driver Kyle Pfitzner in 18th as he tackles a gruelling schedule.

The race for bikes commences at 11.3 am for leg 1 of the event that takes the field 226km from the Alice Springs start to the overnight stop at Finke before returning to Alice Springs on Monday.