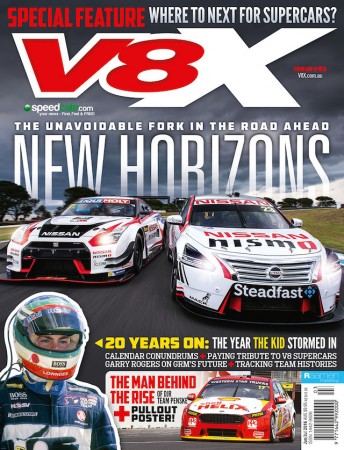 The print and digital editions of V8X Supercar Magazine issue #93 (June/July 2016) are on sale now.

V8X Supercar Magazine issue #93 takes an in-depth look into the future of the Virgin Australia Supercars Championship, through an examination into the technical and schedule conundrums the series faces.

Included in the print edition is a two-sided pullout poster featuring DJR Team Penske on one side and Freightliner Racing on the other.

New Horizons: What is the future for the Supercars championship?

Calendar Conundrum: The strengths, weaknesses, threats and opportunities of the series calendar.

The decade that delivered: The key milestones that followed the AVESCO takeover.

Who do you think you are?: Tracing the histories of each team in the championship.

Analysis: The current and future state of the series.

Analysis: Why tyres are the key to entertaining races.

Analysis: The endurance co-drivers to keep an eye on.

Mark Winterbottom column: Frosty on why the racing has improved in 2016.

Craig Lowndes column: Lowndes reflects on 20 years in the series.

Garry Rogers Column: Rogers on the loss of Volvo funding for GRM.