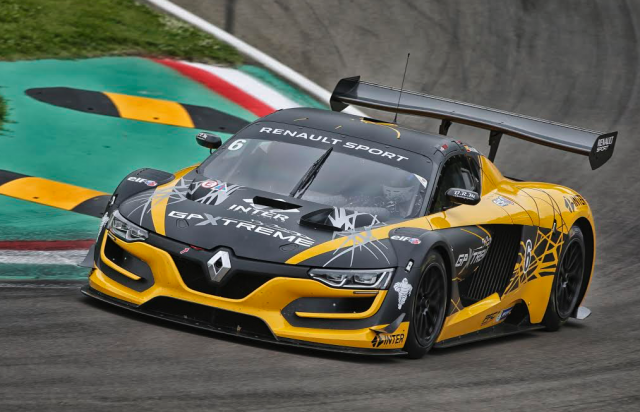 The Renaults compete in their own one-make series

Plans are being hatched to import a fleet of GT3 specification Renault R.S.01 race cars to contest the Bathurst 12 Hour and Australian GT Championship next year.

Brisbane-based financier Adam Hammond intends to order a trio of cars from the French manufacturer to form a new arrive and drive program, run under the banner of Renault Sport GT Australia.

Launched in 2014, the Renault R.S.01 has been competing in its own one-make Renault Sport Trophy series since last year.

However, the R.S.01 has recently received FIA GT3 homologation allowing the Dallara-designed car to compete in a selection of GT3 events.

Fitted with a 500 bhp, 3.8 litre twin-turbo engine sourced from the Nissan GT-R, the Renault has been granted entry into the prestigious 24 Hours of Spa late next month.

The entry will see Blancpain Series organisers, the Stephane Ratel Organisation, undertake Balance of Performance testing with the car.

Hammond remains in the process of sourcing customers but is aiming to lodge orders by the end of July, with a view to a possible entry into the Sepang 12 Hours from December 10-11.

A tilt at the Bathurst 12 Hour remains the priority alongside a 2017 Australian GT campaign.

The project has already been discussed with officials at the Australian GT and the Bathurst 12 Hour.

“I’ve spoken to a few guys involved in GT racing in Australia and there is a bunch of guys looking for arrive and drive packages,” Hammond told Speedcafe.com.

“Right now we are focussed on getting two or three of these cars up and going and we are targeting the Bathurst 12 Hours, but there is a chance the cars will arrive in time for the Sepang 12 Hours.

“I’ve got some guys in Queensland who are keen to assist in preparing and engineering the cars and transporting them. We don’t have any problems on that side.

“I’m pretty confident we will have at least two cars if not more. The guys at Renault Sport have been glued to the screens when the Bathurst 12 Hour is on and are hugely in support of it.” A GT3 kit has been developed for the Renault