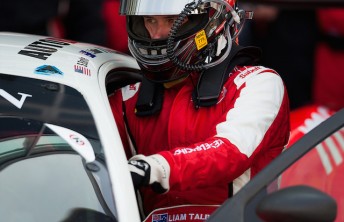 Queensland racer Liam Talbot will make a maiden foray into the Ferrari Challenge Series on the support bill for the Le Mans 24 Hour from June 15-19.

Talbot will add the one-off drive to his regular Blancpain Endurance Series appearances for Kessel Racing and Australian GT campaign aboard a Skwirk Audi.

The Ferrari Challenge drive will give Talbot further experience of the La Sarthe venue having competed aboard an Aston Martin in a support race last year.

Son of the late mining magnate Ken Talbot, Liam’s GT outings are a step towards a planned attack on the Le Mans 24 Hours itself.

“The opportunity to race at Le Mans is just one too good to pass up,” Talbot said.

“I still hold the singular goal of competing at Le Mans in LMP2 and this provides valuable experience towards that goal.

“Having the support of the team at Kessel made this an easy decision, even though I’ll have to keep in mind the difference in aero compared to the GT3 version.”