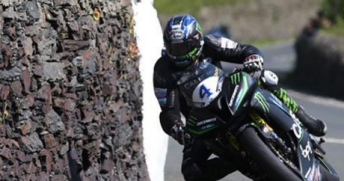 Ian Hutchinson moved to 14 wins to equal the legendary Mike Hailwood after dominating the second Monster Energy Supersport race at the Isle of Man TT.

The CAME BPT/Team Traction Control Yamaha rider dominated from start to finish to take his third win of the week and his fourth Supersport win in a row following last year’s double and his win earlier this week.

It was also his eighth Supersport win in total.

His eventual winning margin was 17.5s with Michael Dunlop overcoming the disappointment of Monday’s disqualification to claim second and Dean Harrison on the podium again in third.

The race was delayed by two hours due to sea mist swirling around parts of the island before it finally commenced.

At Glen Helen on the opening lap,Hutchinson led but only narrowly with Dunlop just six tenths of a second behind which Hutchinson extended to half a second by Ramsey.

The win has seen Hutchinson already clinch the Joey Dunlop Championship with an unassailable total of 95 points with Harrison in second on 67 and Hillier third on 50. 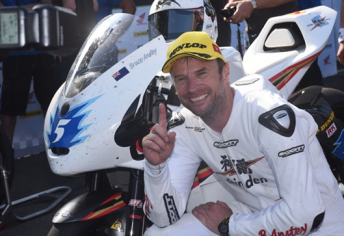 The Flying Kiwi took the lead from team-mate John McGuinness at Ballaugh as the Morecambe man suffered a temporary technical problem.

William Dunlop on the Victory Brammo Power machine pushed Bruce hard, taking a well-earned second, comfortably ahead of Daley Mathison on the University of Nottingham’s entry. 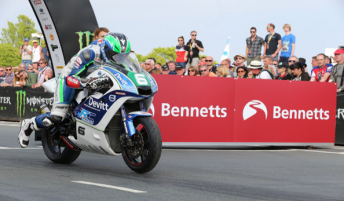 Ivan Lintin won the four-lap Bennetts Lightweight TT race, the second year in a row for both him and Devitt RC Express Racing.

It was also the third in total for the team as he came home 12.4s ahead of James Hillier.