Gold Coast 600 future to be decided this month

Gold Coast 600 future to be decided this month 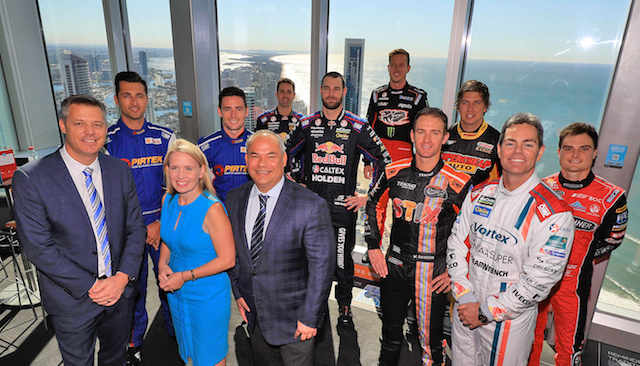 Organisers of the Virgin Australia Supercars Championship remain cautiously optimistic that the Queensland Government will agree to a fresh term for the Castrol Gold Coast 600.

Coming to the end of the current three-year contract, the October 21-23 Surfers Paradise event is the lynchpin of the triumvirate of Queensland races together with the Castrol Edge Townsville 400 and the Coates Hire Ipswich Super Sprint.

Supercars chief executive James Warburton said the outcome of negotiations with the Queensland Government about a contract extension for the Gold Coast will be known by the end of June.

Warburton is buoyant that the series has built a compelling business case for the event to continue as he seeks a five-year contract from 2017.

“You are talking about $85 million in economic benefits and room nights have increased by 44 percent.

“And those increases have been in a very short space of time. That’s from 2012 through to now.

“You get judged on those types of criteria in terms of funding.

“You can never count your chickens in our game but I think we will get an outcome.

“We have proactively sought five years which is probably at the upper end in terms of what people award but that’s what we’d like.”

Queensland Tourism and Events minister Kate Jones was also talking up the success of the Gold Coast at the event’s official launch at the Skypoint observation deck at the Q1 building.

“This is an event that continues to grow each and every single year,” she said.

“What we’ve seen from Supercars is a real focus on growing this event.

“When you look at the events in Queensland on the Gold Coast and Townsville and Ipswich we see that more than $90 million is generated through the Queensland economy.

“It (the GC 600) highlights everything that is great about the Gold Coast, to a huge worldwide audience as well as encouraging as many people on the Gold Coast to come together.”

The Gold Coast is one of a number of Supercars events with contracts that conclude at the end of the current season.

Negotiations with the Queensland Government will also determine the future of the Townsville and Ipswich races.

Talks are meanwhile ongoing with the New South Wales Government in the hope that the Sydney 500 can be replaced by another street race in the state.

Winton’s continuation on the calendar is also yet to be confirmed, while the future of the KL City 400 is under serious question after the cancellation of this year’s inaugural event.

Warburton however defended the status of future events on the calendar saying ‘everything is out to between 2018 to 2030 in terms of their contracts’.

“I think that we’ve got a really strong slate of events,” Warburton said.

“We’ve said all along by the end of June we’ll make some announcements in relation to the finale in regional New South Wales (to replace the Sydney Olympic Park event).

“What happens in terms of the legal issues in Kuala Lumpur will determine whether or not that’s in the calendar for next year. And that kicks off at the end of this month.”