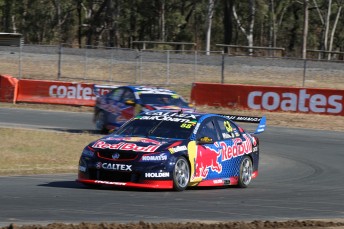 Jamie Whincup is confident his Red Bull team has uncovered gains despite being hampered by poor track conditions during its test day at Queensland Raceway.

The six-time V8 Supercars champion struggled with balance issues for much of Tuesday’s test as last weekend’s storms provided a slippery surface at the Ipswich venue.

Circuit staff attempted to sweep the dirt from the track prior to the lunchtime break in a bid to clean up the tarmac.

Whincup admitted the conditions ultimately restricted meaningful running to the afternoon session once the track had rubbered in.

The Red Bull driver completed the majority of his test program which included runs on soft and hard tyres.

He also enjoyed a brief spell behind the wheel of team-mate Shane van Gisbergen’s car.

“It was a tough day. We would have loved to have got through more but the track was very slippery and dirty in the morning,” Whincup told Speedcafe.com.

“I was only here last week for the tyre test and the track was clean and nice. There was a massive thunderstorm at the weekend and the track conditions were completely different.

“We spent half the day just trying to chase the track and then we made some gains at the end there. We pretty much started our test day from midday.

“We are not going to get massively excited. We didn’t reinvent the wheel but we found a few things in the end that will help us.

“It would have been much better if the track had started clean or we were here last week before the downpour.”

Triple Eight team manager Mark Dutton says his team accrued plenty of data to analyse this week despite a difficult start to the test.

“It was a tough day because track grip was down to begin with as there was a lot of dirt on the track. The circuit did a good job to sweep the track to improve that,” Dutton told Speedcafe.com.

“You never get through all the program and that is the thing with testing. We won’t know how much speed we have got out of it until we debrief.

“It is hard to find a change that is worth a couple of tenths. At this stage of the season you are just checking things you do at the race meeting.”