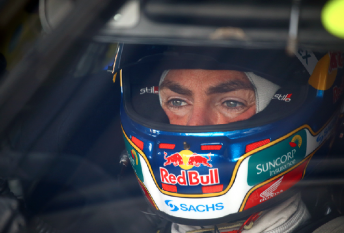 A productive day of soft tyre development at Queensland Raceway has left Craig Lowndes feeling positive ahead of next weekend’s CrownBet Triple Crown at Darwin.

The Triple Eight driver joined team-mates Jamie Whincup and Shane van Gisbergen for a test at the Ipswich circuit on Tuesday as the Brisbane squad went in search of valuable gains.

Lowndes focussed his efforts on working through a planned program built around the soft tyre.

While his team-mates struggled initially with balance issues, the 41-year-old enjoyed a solid day which yielded plenty of positives to take to Hidden Valley.

The #888 ran a selection of upgrades which Lowndes is keen to continue with when the championship reconvenes in the Northern Territory.

“We had a good solid day. It is always difficult when you don’t have too many test days and you have to make sure you utilise them,” Lowndes told Speedcafe.com. “We ran through a number of changes and we refreshed ourselves with a lot of things we thought we knew and confirmed those. It was a really productive day.

“Ludo’s (Lacroix) mindset is that apart from Bathurst we will only be running soft tyres so its really important we get our head around it and it was a good day for it.

“For us it was a positive day for the future. There is no doubt about that.

“We had some good benefit changes which resulted in answering some questions while also asking more questions.

“There wasn’t too many new updates but the car worked fine with them so there was no reason to take them off or modify them.

“We are happy to run the car as is at Darwin.

“It is a different circuit but we will try and implement some of the changes there.”