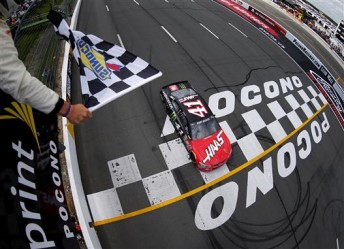 Kurt Busch had more than enough fuel at Pocono

After a 24-hour rain delay, Kurt Busch has stretched his fuel to score victory at the Axalta ‘We Paint Winners’ 400 at Pocono Raceway.

On the final restart his crew said he was two laps (five miles) short of going all the way.

However, an easy right foot not only got him through to the chequered flag but also enough for post-race burnouts.

Busch will now fight for the Sprint Cup in the Chase with his 28th career win.

“But then I knew I just had to balance saving fuel with maintaining my lap times.

“I stuck with the checklist and watched the #88 behind us.

“I had a perfect restart to get by Earnhardt, then I had to do my job to save fuel.

“We had to overcome a lot today.

“When you see others step up, it emphasises the importance of having a total team effort with everyone pulling together.”

Keselowski ran into trouble early at ‘The Tricky Triangle’ when he was black-flagged at Lap 24 for unapproved body adjustments and thus was forced to pit under caution and serve a pass-through penalty under green.

Keselowski’s teammate Joey Logano also encountered hurdles early when Ryan Newman hit his car from behind several times. Those impacts damaged Logano’s bumper and causing him to fall back in the field momentarily.

After a strong qualifying performance, Tony Stewart’s day ended on Lap 92, when he hit the wall and team-mate Danica Patrick, who then collided with Landon Cassill. Stewart returned to the track after a trip to the garage, finishing 34th.

Also encountering dramas Martin Truex Jr who had a pit road accident, while Kyle Busch and Jimmie Johnson both found the fence and had to go to the garage for repairs.