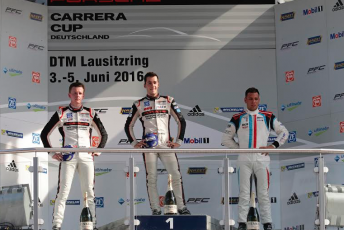 Nick Foster (right) celebrates a podium at the Lausitzring

Australian Carrera Cup champion Nick Foster picked up a pair of podium finishes in the German Carrera Cup meeting at the Lausitzring.

The Queenslander was involved in a thrilling dice with Christian Engelhart in Race 1 coming out on top to claim the final place on the podium.

“That was a fantastic race for me. Christian was strong and put me under incredible pressure. But I stayed calm and I’m really happy with third place,” said Foster, who had started from fifth on the grid.

Foster produced another solid drive in the second race to finish third behind Engelhart and Sven Muller, who won both heats. 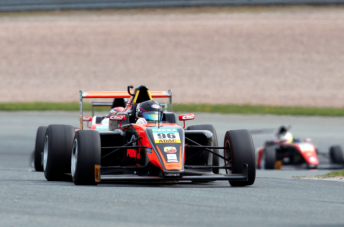 Joey Mawson continues to the lead the ADAC German Formula 4 Championship after a weekend of mixed results at the Lausitzring.

The Sydney driver progressed from eighth to sixth in the opening heat which was shortened after a multiple car crash on the opening lap. Title rival Mick Schumacher took the honours.

Mawson fought back in Race 2 as he followed Schumacher home to claim second and valuable championship points.

However, the young Aussie sustained contact in the final race which broke his front wing and subsequently dropped him to 23rd.

As a result, Mawson’s championship lead over Schumacher has been cut to three points.

“It was one of those weekends where we just didn’t get the breaks we needed,” said Mawson.

“That race was then shortened, we only raced 10 of the original 30 minutes, due to a multi-car accident on lap one.

“Race 2 I just couldn’t get a run on Mick (Schumacher) to mount a serious challenge for the lead and then Race 3 just didn’t go our way when Thomas Preining turned in on me and damaged my front wing.

“On the upside I’m still in the lead of the championship and the next event is at Oschersleben where I dominated the opening round.”

The championship visits Oschersleben from June 17-19. 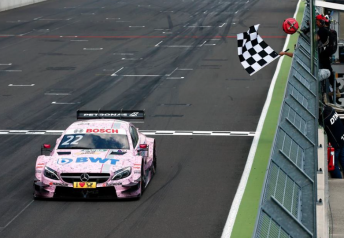 Lucas Auer scored his maiden DTM victory with a commanding drive at the Lausitzring.

The Austrian made no mistakes from pole position as he built a healthy lead before the making his mandatory pitstop.

Auer regained the lead once the pitstops were completed which allowed him to comfortably take the chequered flag from a charging Mattias Ekstrom who surged from fifth in the second half of the race.

Robert Wickens claimed the final place on the podium which was enough to assume a three point lead at the top of the standings.

Fresh from his Australian GT exploits at Phillip Island last weekend, Miguel Molina scored his second career DTM win in the opening race of the weekend.

The pole-sitter initially lost the lead to Jamie Green but managed to fight back to take the chequered flag from the Brit, with Wickens in third.

The DTM series heads to the Norisring from June 24-26. 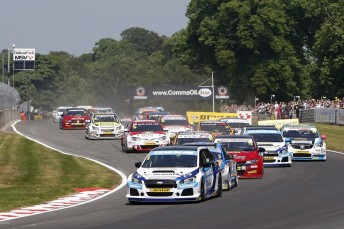 Turkington soared to victory from pole position in the opening race at the Cheshire circuit.

The Northern Irishman managed to resist a challenge from West Surrey Racing’s Sam Tordoff, while Jason Plato ensured a double podium for Subaru in third.

The result follows a troubled debut campaign for the manufacturer that saw Team BMR withdraw its four Subaru Levorgs from the previous round on safety grounds.

Tordoff starred in Race 2 as the BMW driver passed pole-sitter Turkington at the start before going on to score his first win of the season.

Turkington was left to follow Tordoff home in second with Plato coming home in third.

Tordoff, who became the ninth different winner in 12 races, now leads the championship by a point from Neal ahead of the visit to Croft from June 18-19. In the 100-minute race the siblings prevailed by just under two seconds in their Corvette DP .

The victory was the second successive for the Taylor brothers after claiming the Long Beach race in April.

Luis Leeds has slipped to fifth in the British Formula 4 Championship after a challenging weekend at Oulton Park.

The Melbourne driver’s weekend started on a negative when a suspension issue in qualifying restricted him to the rear of the grid for the opening race.

Leeds made up four positions in the opening race to finish 13th. He finished eighth in Race 2 before finishing 11th in the final heat.

The 16-year-old headed to the Cheshire circuit lying second in the championship but is now 47 points adrift of championship leader Petru Fluorescu.

The Queenslander led Race 2 from pole position and seemed to be on course for a maiden win until he clipped a tyre bundle which put him into retirement.

Goddard ended his weekend on a positive note with a 10th in the final race.

Florescu, Devlin Defrancesco and Rafael Martins shared the spoils in the three races.

The championship heads to Croft for the next round from June 18-19.