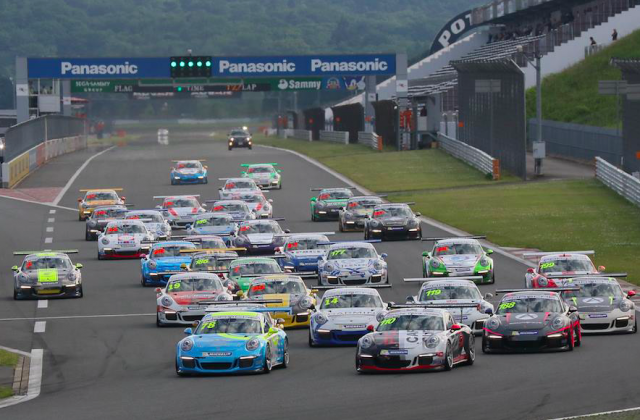 The Asian and Japanese fields combined

The event saw the two Porsche championships share the track for the first time, with 34 of the 911 GT3s taking to the picturesque Japanese venue for the 10 lap feature race.

Winning the exhibition race followed a third and a first for Jousse in the two Carrera Cup Asia heats, the second of which took place in heavily wet conditions.

Jousse fell as low as fifth on the opening lap thanks to a forceful pass from Nico Menzel, who went on to claim second.

Starting from pole in the second race, Jousse eased his way to victory from Tang and Menzel, who both overcame fast-starting Australian Mitchell Gilbert during the race.

Jousse (91 points) leads the Carrera Cup Asia standings from Menzel (80) and Tang (64) ahead of the next round at Thailand’s Chang International Circuit on July 8-10.

The fourth round on August 26-28 will take place at Sydney Motorsport Park, where the championship will share the billing with its Australian counterpart.