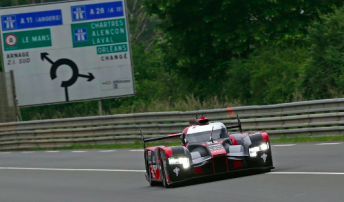 Audi has completed a solid build-up to the Le Mans 24 Hour after sailing to the fastest time at the official test day.

The #8 Audi R18 e-tron quattro driven by Lucas di Grassi produced a best lap of 3:21.37s at the 13.6km circuit midway through the afternoon session ahead of the June 18-19 classic.

It was the second four-hour session where Audi was able to flex its muscles and steal some thunder from defending Le Mans champions Porsche.

Mark Webber had occupied the fastest time with a 3:22.27s in the #1 Porsche 919 but could not return serve.

The final session was cut short by just under 30 minutes following a heavy shunt suffered by Michael Shank Racing’s Ozz Negri in the #49 Ligier JS P2.

Andre Lotterer was able to extract a 3:22.58s best in the #7 Audi to be fourth ahead of the pair of Toyotas which were caught short by the red flag.

The #33 ORECA-Nissan driven by Tristan Gommendy for the new-to-Le Mans Philippine Eurasia squad topped LMP2 with a 3:36.69s best.

GTE Pro saw Antonio Garcia put his Corvette Racing C7.R on top while GTE Am was topped by Nicky Catsburg in another Corvette for the Larbre Competition team.