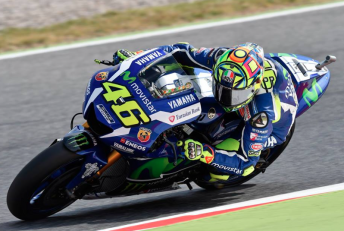 Valentino Rossi fought off a determined Marc Marquez to win a dramatic Catalan Grand Prix that saw Jorge Lorenzo lose the championship lead after being taken out by Andrea Iannone.

Rossi emerged eighth from the start but the Yamaha rider climbed into the lead on Lap 7 of 25 before coming through an exciting battle with Honda’s Marquez in the closing laps.

Honda’s Dani Pedrosa claimed the final place on the podium after a solid ride.

Lorenzo led the field away from the middle of the front row, tailed by Marquez, while Pedrosa passed Iannone for third on the opening lap.

Rossi was sixth by the end of the opening lap, and found himself in a podium position when he passed Pedrosa on Lap 3.

The Italian relieved Marquez of second on Lap 6, then took the race lead off his Movistar Yamaha team-mate Lorenzo at the start of Lap 7.

His afternoon became even worse when he was collected by Iannone on Lap 17 at Turn 10.

The Ducati rider misjudged his braking resulting in heavy contact with the Yamaha, which eliminated the pair from the race.

Marquez meanwhile continued to harass Rossi until he took the lead into Turn 1 with three laps remaining.

Rossi, however, returned the favour one lap later and ultimately pulled away for a 2.7s victory as Marquez became increasingly ragged in attempting to fight back.

“All race I was pushing a lot but unfortunately I wasn’t able to gap Marquez enough to escape,” explained Rossi.

“I knew that it would be hard but I tried another time and I was able to take the small gap that is so important for the last lap.

“It’s a great, great victory. One of the best of my career. This win is for Luis Salom and all his family,” he said in one of many tributes to the Moto2 rider, who lost his life in a crash during Friday practice.

After a spirited challenge early on, Maverick Viñales finished fourth ahead of Pol Espargaro (Tech 3 Yamaha).

Marc VDS Honda’s Jack Miller claimed a career-best 10th having been promoted a position after Hector Barbera was penalised for shortcutting the chicane on the final lap.

Marquez reclaims the championship lead with a 10 point margin over Lorenzo ahead of Round 8 in Assen from June 24-26.