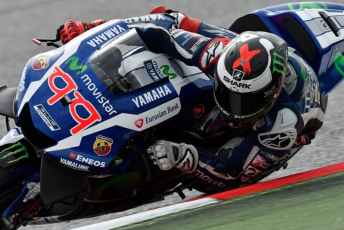 Jorge Lorenzo has criticised the decision to change Turn 10

MotoGP elected to switch to the Formula 1 circuit configuration for the remainder of the Catalan Grand Prix weekend following Luis Salom’s fatal crash during Moto2 practice on Friday.

The changes saw the addition of the Turn 14/15 chicane which bypasses Turn 12 where Salom crashed and the use of a tighter Turn 10 hairpin.

Following qualifying Rossi felt changes to Turn 10 were not necessary with the run-off area at that point of the circuit no worse than other corners on the MotoGP calendar.

The Italian does however agree with the inclusion of the chicane to improve rider safety at the venue.

“There are a lot of points in the season where if you have a problem with the bike, you don’t have enough (run-off) room,” said Rossi, who will start Sunday’s race from fifth on the grid.

“I don’t understand why they modify another corner, where nothing happened (Turn 10).

“Personally, Turn 10 you don’t have to change. The run-off area is not a lot, but it’s like this at a minimum of 20 or 30 (other) corners during the season.”

The view was echoed by reigning world champion Lorenzo who claims he was not made aware of Friday’s Safety Commission meeting where the track changes were decided.

The championship leader says he is keen to see changes made to reduce risks for riders but would have liked some input in the decision.

Lorenzo was almost 0.5s slower than pole-sitter Marc Marquez in qualifying and will line up second on the grid for today’s race.

“Turn 10 was not, for me, necessary to change, and these two changes make, finally, our (Yamaha’s) life more difficult,” said Lorenzo.

“As leader of the world championship and the champion of last year, I didn’t receive any communication to be there (at the meeting), and I don’t understand why we weren’t there together, all the riders, to take such an important decision.

“If I knew they wanted to change the two corners, for sure I would have gone.

“For such an important decision and a special occasion, for sure I would go, to at least understand how we can improve the safety and to say my opinion.”

Honda’s Marquez is in favour of the change having suffered a high speed crash at Turn 10 during the race in 2014.

“Two years ago, we try (the revised layout) at Turn 10,” said Marquez.

“Everyone was agreed that, for the safety, it was better.

“Every rider that has gone straight (on) there has arrived in the wall or very close to the wall.

“If nothing happened, we don’t need to change anything, but it’s better to change before the accident. We did it for that reason – and everybody who was there agreed.”

It has since been revealed that riders were prepared to see the Catalan Grand Prix abandoned in the wake of Salom’s death.