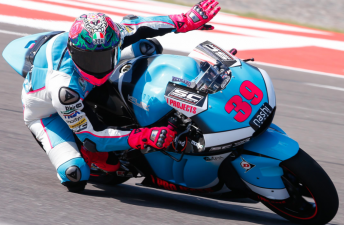 MotoGP officials will continue to investigate Luis Salom’s fatal Moto2 crash having declared they have ‘no explanation’ for the cause of the tragic accident.

The rising star was killed during Friday practice when he fell approaching the high speed Turn 12 at the Circuit de Catalunya in Spain.

MotoGP boss Carmelo Ezpeleta revealed at a media briefing held prior to qualifying that officials are yet to determine the reason for the crash.

FIM Grand Prix Safety Officer Franco Uncini did however claim that Salom was hit by his Kalex bike, which had rebounded off the Turn 12 air fence.

“It’s important to say that today we don’t have an explanation about the accident,” said Ezpeleta.

“I was (later) in the place where there was this impact with the fence and this line, with the marks of the tyres that are there, is absolutely outside of where you need to take the corner.

“He was not pushing a lot, something happened, we don’t know exactly, and it’s for that we want to study.

“We want to understand exactly what happened. We need to reflect and make it safer.”

A decision to adopt a revised circuit layout for the remainder of the weekend was taken in the aftermath of the crash.

The Formula 1 circuit including the re-profiled Turn 10 and the Turn 14/15 chicane, which bypasses the scene of Salom’s crash, is now in use.

Officials will discuss the possibility of utilising the altered layout for future races at the venue at the next Safety Commission meeting.

“In the next commission meeting we will discuss with the riders and we will see what they think about this new layout,” said Uncini.

“When we have all the information about (the crash) at the next Safety Commission meeting, we’ll decide if we go back to the old layout or continue with the new layout.”