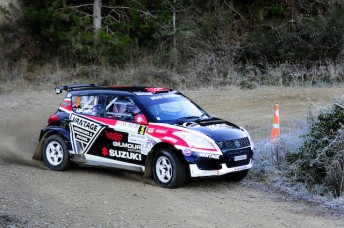 Emma Gilmour has became the first female to win a national rally championship round in New Zealand. Pic: Kate Ridder

Emma Gilmour has become the first female to win a national rally championship round in New Zealand after her triumph in the Joe’s Garage/Lone Star Rally of Canterbury.

The Suzuki Swift driver and her Queensland-based co-driver Anthony McLoughlin led all the way in the event.

Gilmour beat Andrew Hawkeswood by 1:15s as she dominated proceedings that was capped by a win in the final power stage.

“I’m really happy – it’s so exciting to actually be standing on the top step of the podium,” Dunedin-based Gilmour said.

“Many people have put in so much effort over the years and this is the perfect way to repay them.

“I am also honoured to be the first female to win a NZRC round.

“It was particularly satisfying because we led all day from start to finish.”

The Canterbury rally proved challenging in changeable conditions which included ice in the morning stages.

“We had one moment where the engine coughed and spluttered after going through one of the long, deep fords but thankfully we only lost about 30 seconds,” Emma says.

“A championship round win has been a long time coming but is significant given the fact that Emma was instrumental in bringing to NZ a new generation rally car from which the new AP4 regulations have been developed,” Budd said.

“It is great to see Emma’s dedication to the sport over many years rewarded with this win.”
Gilmour now moves up to second in the NZRC, six points adrift of David Holder with two rounds remaining.