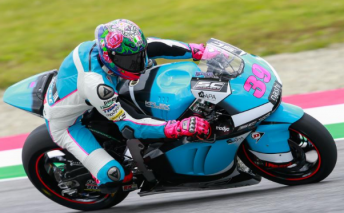 Spanish rider Luis Salom has died after he fell during Practice 2 for Moto2 at the Catalunya circuit in Barcelona.

Medical cars and two ambulances attended the scene as well as a helicopter.

However due to the severity of his condition after the 24-year-old went into cardiac arrest it was decided he would be transferred by road to Hospital General de Catalunya.

On arrival he underwent emergency surgery but was pronounced dead at 16.55 (local time).

As agreed with Luis Salom’s family, the riders, teams and the Safety Commission, it has been decided that the Gran Premi Monster Energy de Catalunya is to go ahead.

In a Safety Commission meeting attended by Marc Marquez, Andrea Iannone, Pol Espargaro, Jack Miller, Bradley Smith, Alvaro Bautista, Aleix Espargaro, Andrea Dovizioso, Tito Rabat and Cal Crutchlow, it has been agreed to change the configuration of the circuit to race for the remainder of the event to the F1 track layout.

As a result, practice time will be extended with a new schedule for Saturday.

Salom made his World Championship debut at Jerez in 2009 in the 125cc category.

He finished on the podium in 25 races, including nine victories in the Moto3 World Championship.

He finished second in the 2012 Moto3 World Championship and third in 2013.

Salom was a three times podium winner in 41 Moto2 races which included a second place in this season’s opener at Losail in Qatar.

The FIM, Dorna, IRTA, RFME and the Circuit de Barcelona-Catalunya passes on its condolences to the family, friends and team of Salom.