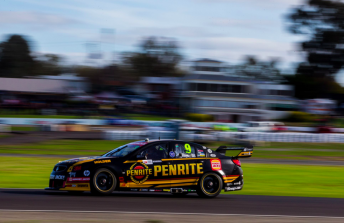 David Reynolds on the way to sixth at Winton

David Reynolds is confident that Erebus can build on its strong Winton result amid a mid-season shake-up of its engineering structure.

Since Winton, Erebus has split with Reynolds’ highly experienced race engineer Campbell Little, who had been contracting to the team since the start of 2015.

“I like working with him, but as far as the team’s future goes I think they need someone that works at the factory five days a week.

“At the start of the year Campbell took on a really difficult job with the team moving, changing manufacturers, drivers and staff.

“It might be a bit of short term pain initially (losing Little), but now for us to progress we need someone in Melbourne because it’s hard to do that job remotely.”

Italian DeRosa moved to Australia 18 months ago, joining Erebus as a mechanic over the recent off-season.

Ryan and Little had been Erebus’ only carryover staff members when it shifted from Queensland to Melbourne during the summer.

Uniquely, a budget-conscious structure has seen it operating without any full-time workshop based engineers.

The team’s second car is engineered by Walkinshaw Racing’s Mathew Nilsson, who joins Erebus only for the race weekends.

Reynolds admits that it’s a very different environment to what he’s been used to at previous teams.

“Prodrive had eight full-time engineers crunching numbers and making graphs, so there’s a lot less graphs going on, that’s for sure,” he laughed.

“Engineering wise, it’s about having good people steering the ship. Before it was myself, Barry and Campbell.

“We’ve lost one person, but myself and Barry are there and Mirko brings his own experience and philosophies too.

“The coolest part of our sport is that even if your car isn’t fast you can make it fast.

“It takes a lot of time, effort and trial and error, but if you have the smarts you can make it fast.

“Our base car was a HRT (Holden Racing Team) car and we’re trying to re-engineer it to suit what we want.

“At Winton we had good pace and there’s no reason we can’t go to Darwin and have good results, as long as we’ve got the car in the window.”

Still yet to qualify inside the top 15 all year, Reynolds is looking forward to working through a big test program at Winton on Monday.

“We’ve got a lot of new stuff to try, lots of ideas and different ways to go about it,” said Reynolds of the test.

“If we run out of time we might even run on the Tuesday as well, but my thought is that we will want to have a methodical analysis of everything after Monday.

“Winton is an odd track now because of the resurface. It’ll help for Darwin and Bathurst, but I don’t know how much we’ll have to detune the car to suit the low grip tracks.

“But I’m really looking forward to the test. I’ll have a headache by the end of it because there’s so much to think about.”