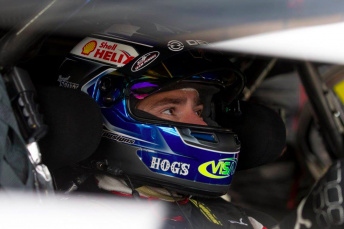 DJR Team Penske will debut a new car for Scott Pye at Hidden Valley as the squad continues its push towards the front of the V8 Supercars field.

Dubbed DJRTP03, the chassis is the third built since Penske’s majority takeover of the team at the end of 2014 and joins the car debuted by Fabian Coulthard for the start of this season.

While the team regularly alternated chassis for its single entry last year, rolling out Pye’s new car is the only planned swap for 2016.

Pye will shakedown his latest Ford Falcon at Queensland Raceway next week as DJR Team Penske joins Triple Eight and Tekno Autosports at a multi-team test.

Coulthard and Pye head to Darwin 14th and 16th in the championship respectively after an inconsistent start to the campaign.

With Coulthard in his first season at the team, the spotlight has largely been on the performances of Pye, who is out-of-contract at year’s end.

As the team finishes the build of the new car, DJRTP managing director Ryan Story stresses it is doing everything it can to get the best from Pye this year.

“I think that his race craft is very strong and we continually see that, but where we’re looking for a bit of improvement is consistency on the qualifying front,” Story told Speedcafe.com of Pye.

“That’s not a requirement solely of him, that’s something we need to work together on to improve.

“Both of our guys are more than capable of putting together a solid weekend, but we need to give them a car and the environment to do that.

“We’ve made a huge investment in Scott and he was part of the rationale behind going to two cars.

“We want to make sure he’s got every opportunity (to prove himself).” Pye at the wheel at Winton

“We’re still trying to understand the car, particularly on Fabian’s side of the garage,” explained Story.

“Phil and Fabian have come from working with something fundamentally different to what they have now.

“I think a lot of what we’re seeing at the moment is a process of understanding what it is that they’ve got underneath them.

“We have a good platform and once we get our heads around it better we’ll continue to see our momentum go in the right direction.”

The learning process has included running both the Supashock and Ohlins dampers this year after switching from the Sachs to the Supashocks midway through 2015.

The experimentation with the Ohlins follows an off-season discontinuation of the team’s technical alliance with Prodrive, which pioneered the Supashocks in the category.

DJRTP had received data and set-up information from Prodrive last year but, according to Story, was unable to make full use of the information as it tailored its package around Pye.

“We’ve gone in a slightly different direction on the engineering front this year in terms of not having that active, hands-on relationship with Prodrive,” said Story.

“We were heading in divergent paths last year in making our car work for Scott, so it made sense for us to go in the way we have and I stand by it being the right decision for us.

“Certainly there are days where those guys (Prodrive) are well and truly ahead of us on the timesheet.

“But the decision was down to the fact that we were effectively not able to appropriately use the set-ups and get commensurate results out of them.”

Prodrive is also expected to wheel out a new car for Hidden Valley, to be raced by defending champion and current points leader Mark Winterbottom.