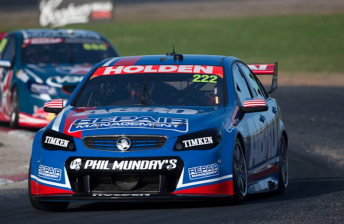 Cameron McConville jumped behind the #222 Commodore at Winton

Nick Percat is keen to combine with Cameron McConville for the upcoming Sandown 500 following the latter’s recent laps at Winton.

Percat is set to team up with Oliver Gavin for Bathurst and the Gold Coast but the Brit is unable to contest Sandown due to a clash with the World Endurance Championship.

McConville jumped behind the wheel of Percat’s Lucas Dumbrell Motorsport entry during the 30 minute additional driver practice at the recent Winton Super Sprint.

The run proved to be the former full-timer’s first in a Car of the Future specfication V8 Supercar since a tyre testing outing at the Circuit of the Americas in 2013.

Percat watched McConville’s progress closely at Winton and feels his experience would be a great addition for Sandown.

Having been away from competitive V8 Supercar racing since 2012, the Clipsal 500 winner says the decision is in hands of McConville, who must also juggle his commitments with CAMS.

“I would be keen to have Cam on board,” Percat told Speedcafe.com.

“I need to get him back in the car. We need to give him a fair crack as we had engine problems (in the practice session).

“He didn’t get a fair go to see if he thought he was up to it.

“He jumped in the car and there was not one seatbelt change or anything he just fitted right in.

“He didn’t mind the balance of the car which is one of the biggest hurdles in making sure someone is compatible to drive with you.

“Experience works wonders in those types of races which is why I have used Oliver Gavin.

“He has won five Le Mans and brings so much experience in other areas, and that is something I can learn from Cam.

“It ties in well but at the end of the day he will make the final decision if he is prepared enough and ready for it. I don’t see any issue.”

LDM is also yet to lock down a co-driver for Andre Heimgartner, whose car was steered in Winton practice by 15-year-old Dunlop Series driver Alex Rullo.