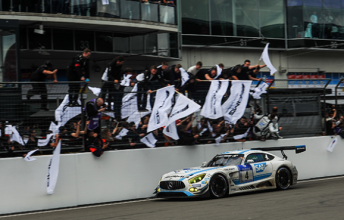 Maro Engel takes the flag at the Nurburgring 24 Hour

The German reeled in HTP Motorsport’s Christian Hohenadel before coming through a tense fight to score the win for the #4 Mercedes he shared with Bernd Schneider, Adam Christodoulou and Manuel Metzger.

The race was full of incidents with the most notable being a stoppage early in the going when a hail storm hit the circuit that saw several cars endure off track excursions.

Rob Thomson was the first Australian home in 38th overall and second in the Cup 3 class aboard Team Mathol Racing’s Porsche Cayman.

Countrymen Mal Rose and Peter Leemhuis finished third in the SP8 class and 59th overall behind the wheel of the AF Racing AG/R Motorsport Aston Martin. 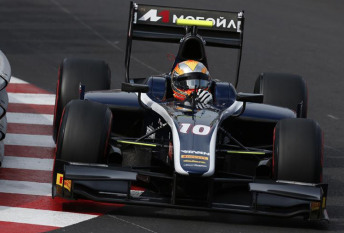 Markelov started the feature race from 15th but stayed out the longest before making his compulsory pitstop with just two laps remaining.

The long stint proved to be the correct decision as he rejoined in front of Norman Nato before going on to take the chequered flag by 1.5s.

Oliver Rowland secured the final spot on the podium in third ahead of fellow Brit Alex Lynn, while New Zealand’s Mitch Evans was fifth, after being hit with a five second penalty for cutting the chicane.

ART Grand Prix’s Nobuharu Matsushita completed a lights-to-flag win in the sprint race as he took the win by 13.6s from Marvin Kirchhofer and Raffaele Marciello.

Nato leads the championship standings by a point from Markelov ahead of the third round at the Baku City Circuit from June 17-19. Mattias Ekstrom holds a five point lead in the FIA World Rallycross Championship after scoring his third consecutive win of the campaign at Lydden Hill in Great Britain.

The Swede had been struck by engine issues and a puncture in the heats but that failed to prevent him from winning his semi-final by the slimmest of margins from Ford’s Andreas Bakkerud.

Ekstrom once again faced up against reigning world champion Petter Solberg in the final with the Audi driver taking the chequered by a 1.1s from the former WRC champion.

Peugeot’s Timmy Hansen came through to finish third ahead of Kevin Hansen, Timur Timerzyanov and Bakkerud.

The FIA World Rallycross Championship heads to Norway for the fifth round from June 10-12. 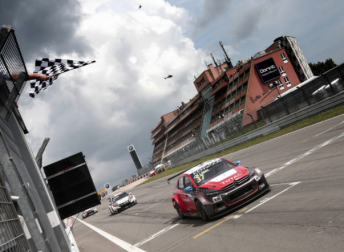 Jose Maria Lopez was victorious at the Nurburgring

Jose Maria Lopez extended his lead in the World Touring Car Championship by completing a clean sweep at the famed Nurburgring Nordschleife.

The reigning world champion took advantage of a huge crash involving leaders Tiago Monteiro and Yvan Muller to take the win in the opening race.

Monteiro looked to be on course for victory when he suffered tyre failure on the final lap which sent him hard into the barriers.

Muller, who was following in second, was unable to avoid the Honda and was eliminated from the race.

Lopez went on to take the win by 0.5s from Tom Chilton (Citroen) and Norbert Michelisz (Honda).

The second race saw Lopez claim victory by 0.4s from Michelisz after passing the Hungarian early in the encounter.

Chilton completed his strong weekend with a third place finish.

Lopez holds s 69 point lead at the top of the standings ahead of the championship’s visit to Moscow Raceway from June 10-12. 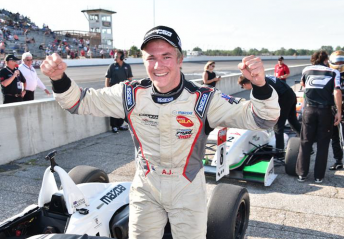 Anthony Martin celebrates his second USF2000 win of the season

Australia’s Anthony Martin boosted his USF2000 title hopes by scoring his second victory of the season at the Lucas Oils Raceway in Indianapolis.

The Western Australian spent the majority of the race behind Parker Thompson before completing a move for at the lead on lap 62.

Once in front Martin never looked back and took the victory by 1.3 seconds with Victor Franzoni in third.

“This championship is going to be intense and I have to take every risk I can to get every point I can, and getting the win here really gives me confidence,” said Martin.

“Moving up through the Mazda Road to Indy, you race on more and more oval tracks so to get my first win on a track like Lucas Oil Raceway is great.”

Martin’s victory has seen him close to within 26 points of championship leader Thompson.

CLICK HERE for a report on the Indy Lights and Pro Mazda Series races from Indianapolis. 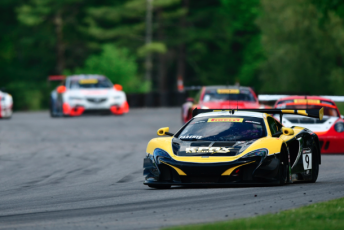 Alvaro Parente completed a clean sweep at the latest round of the Pirelli World Challenge at Lime Rock Park.

The K-Pax Racing McLaren driver took the victory in the opening encounter by 6.1s from the CRP Racing Audi R8 of Kyle Marcelli.

The factory Cadillac of Johnny O’Connell completed the podium.

Parente faced a tougher challenge in the second race as he came under immense pressure from Patrick Long’s Wright Motorsports Porsche GT3-R.

Despite Long looming in his mirrors, Parente held on to take the win by 1.1s as Marcelli inherited third after O’Connell suffered a puncture.

The duo were airlifted to hospital with Palmer diagnosed with a head injury. De La Torre has sustained fractures and bruising to his torso.

Both drivers remain in hospital where their conditions are being closely monitored. 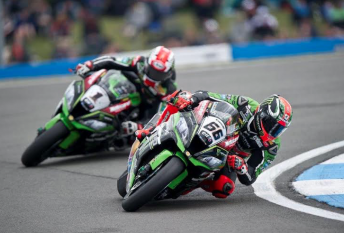 Tom Sykes recorded a double victory in front of his home crowd at the British round of the World Superbike Championship at Donington Park.

The Kawasaki Racing Team rider was forced to produce a comeback ride having dropped to fourth from pole position in the early stages of Race 1.

However, a crash for early leader Chaz Davies and a mistake from Jonathan Rea saw Sykes locked into a battle for the lead with Ducati’s Davide Giugliano.

After a lengthy tussle, Sykes prevailed to take the chequered flag by 2.8s, while Rea recovered to third.

Sykes scored his eighth consecutive win at Donington Park after coming through a race long dice with team-mate Rea in the final heat.

Davies claimed the final spot on the podium in third ending the weekend on a positive note.