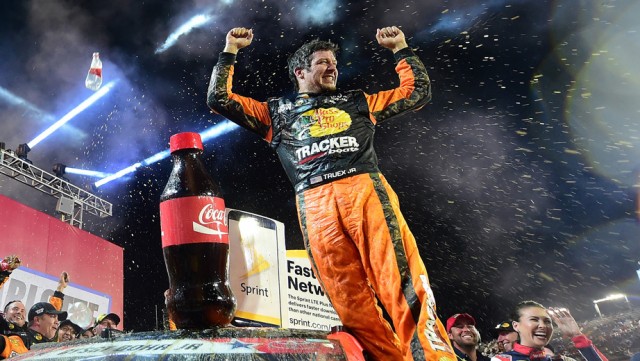 Martin Truex Jr. has left the field in his wake as he led an incredible 392 of 400 laps at the Coca-Cola 600 at Charlotte.

Truex Jr.’s performance had historians reaching for the record books with the most laps led and most distance in front. In 1967 Jim Pascal set the previus best mark of 335 laps at the 1.5-mile track. Truex’s 588 miles led were the most in any NASCAR race in the history of the sport

He took the lead from the pole and only on the exchange of pit stops did he give up the front spot. Added to this was excellent pit stops, both under green and caution. The calls from the Furniture Row crew, including Australian engineer Peter Craik, allowed Truex Jr. to control the race. The other Australian connection for the Denver-based operation is engine engineer Jon Grove.

The Toyota driver had dominated a number of races this year, but could not close the deal. His performance at Charlotte showed why he was one of the contenders for the title last year and will once again be in the mix come the Chase for the Sprint Cup.

The only serious scares came late when with seven laps to run Kyle Busch hit the fence, but came straight to pit road and the race stayed green. Then with three laps to run Ryan Blaney cut a rear tyre, but again he was able to stay out of the way and keep the race running.

His performance was applauded by not only the fans, but also the oppositions pit crews who lined the road into Victory Lane.

“That meant a lot to me,” said Truex Jr.

“It’s just kind of sinking in that we have won the 600. A lot of emotion. An amazing day and amazing weekend for all of us. A weekend you dream about.

“I had confidence in my team and a lot of people behind me. My pit crew did a great job tonight. I had a lot of fun racing tonight.”

Lost in the performance by Truex Jr. was the other place getters with Kevin Havick coming home second ahead of Jimmie Johnson.