The Australian had driven faultlessly through early stints on full wet and intermediate tyres and appeared in the box seat for victory as the field switched to slicks just prior to half distance.

A miscommunication between the Red Bull engineers and mechanics, however, saw a lengthy delay as the crew scrambled for tyres while Ricciardo sat in his pit box.

Rejoining marginally behind Hamilton, a frustrated Ricciardo repeatedly attacked the Mercedes over the remaining laps but ultimately proved unable to get by.

The tightest moment came at the resumption from a Virtual Safety Car period, where Hamilton slithered through the Nouvelle Chicane as he fought to defend the place.

Ricciardo had the momentum on the exit but found the door firmly closed as he ranged down the outside.

The moment was investigated by the stewards, who elected to take no action. 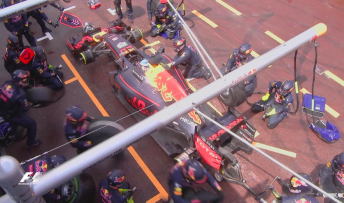 Hamilton ended a marathon final stint 7.2s clear of his rival, scoring the second Monaco GP win of his career.

Mercedes had piled the pressure on Red Bull prior to its fateful pitstop by electing to keep Hamilton on his full wets until the circuit was dry enough for slicks.

The move saved Hamilton an entire pitstop, allowing the Brit to take full advantage of the error that was to come.

Sergio Perez scored Force India’s first podium of the year in third ahead of Sebastian Vettel and Fernando Alonso.

All three benefitted from a slow second pitstop for Nico Rosberg, who had to be held by the Mercedes team as his rivals filed past.

Rosberg had taken the heavily wet start, but struggled to match the pace of Ricciardo and team-mate Hamilton as soon as the Safety Car peeled away after seven laps.

Seven drivers crashed out of the near two hour contest, including last start winner Max Verstappen.

Charging after a pitlane start, the Dutchman made heavy contact with the fence at Massenet on lap 35 of 78 after a lock-up saw him understeer off the racing line.

Jolyon Palmer had been the first to find the wall, spearing into the barriers on the front straight as soon as the race turned green.

Kimi Raikkonen caused race-ending damage to the front of his Ferrari with a touch of the wall a short time later.

Kevin Magnussen found himself the victim of a Daniil Kvyat divebomb that took both out of the race at La Rascasse, ending a miserable day for the Russian that had included early mechanical troubles.

The same corner later claimed both Saubers as a frustrated Marcus Ericsson unsuccessfully tried to force his way through on Felipe Nasr, who had ignored team instructions to surrender the position.