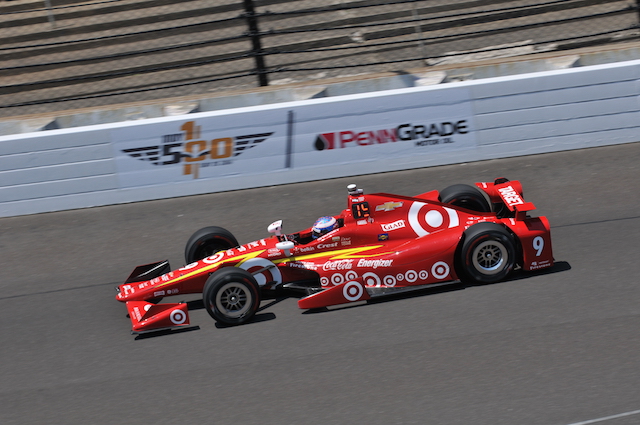 Dixon is buoyed by weather forecasts for Sunday which place the ambient temperature at 85 degrees (29.4 celsius) which falls into the optimum operating temp for his machine.

The 35-year-old says the Chip Ganassi Chevrolet squad has indicated the sweet spot for lap performance in the #9 Dallara is in the high 80 degrees.

“As a team we are wanting it to be as hot as possible,” Dixon told Speedcafe.com.

“It looks like it’s going to be mid-to-high 80s. It’s a lot different than especially in the early weeks of testing and qualifying where we were in the 70s.

“Monday was good to get some running in low 80s. Whether it benefits one manufacturer to another it’s hard to tell.

“Right now I think our sweet spot is when the conditions are in the high 80s.”

Dixon will start from 13th after missing the mark in qualifying last weekend but is heartened by recent examples of winners coming from rearward grid positions.

“It doesn’t matter where you qualify here, as long as you’ve got a good race car,” Dixon explained.

“You can come from anywhere. Look at (Dan) Wheldon (from 16th in 2005) Dario (Franchitti) from 16th in 2012, Juan Montoya last year after having an issue early going to the back and coming through to win.

“Obviously starting a little further back is not what you want or what we expected but it’s reality and we’ll do the best job we can and move up pretty quickly.”

Dixon is expecting a repeat of the flat chat pace that dictated last year’s 99th running of the Indy 500.

“Typically with the 500 from my previous races it starts out really fast and then you kind of have a bit of a lull where everybody works out changing the car, happy to sit in one spot for a while and save some fuel,” he said.

“But last year it was just flat out from the word go all the way to the end which is the the first time I’d witnessed that in my Indy 500 races.

“It’s going to get frantic pretty quick, you can’t really settle in any more. It’s all about staying up front,” Newgarden told Speedcafe.com.

“You can get pushed back pretty fast. There are so many guys who can pass pretty easily now.

“It’s going to be a struggle to stay up front. The last four or five years it’s been so hard to stay up there because you can pass so easily.

“The last couple of stops that’s when we see more wrecks because people get more desperate.

“The last stint everyone is going full force and they are not going to give you any room. You are not here to finish third or fifth.

“There’s only one winner of the Indy 500 and there’s all the other drivers who didn’t win.”