Penske on pacing the Indianapolis 500 field

Penske on pacing the Indianapolis 500 field 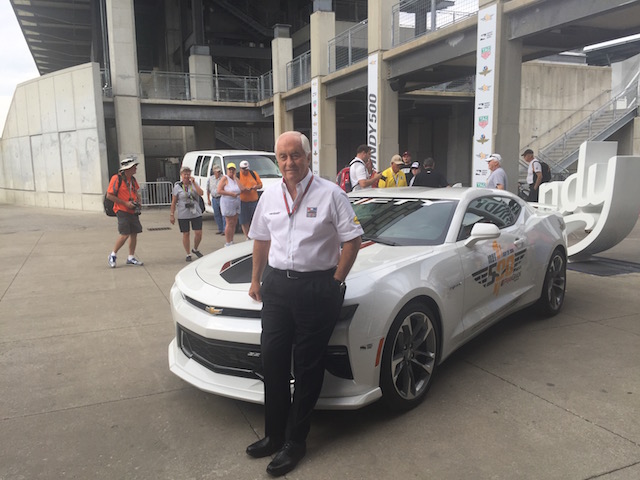 Team giant Roger Penske has assured his four drivers that he intends to keep the Pace Car off the wall as he takes the honour of pacing the 100th running of the Indy 500.

Penske, 79, is gunning for a 17th win in the classic through drivers Will Power, Simon Pagenaud, Helio Castroneves and defending champion Juan Montoya.

Adding to his momentous year, Chevrolet is giving Penske the honour of driving the Camaro SS 50th anniversary edition as he celebrates the half century of establishing one of the greatest racing organisations in the world.

“I get a lot of advice from those guys (Team Penske drivers),” Penske quipped to Speedcafe.com.

“I told them (drivers) that I will try to do my best and keep it off the wall for four laps. They have to do it for 200 laps.

“They shouldn’t be worried about me. They have to worry about their race.

“And the V8 guys (DJR Team Penske drivers Scott Pye and Fabian Coulthard) have been pretty excited about being here and seeing the place and the event.”

Three-times Indy 500 winner Johnny Rutherford has given Penske explicit instructions about incrementally increasing his speed in the Camaro.

“Rutherford took me around and told me the parameters of what I have to do on raceday,” Penske said.

“We will pace the race and then come into the pits and I will stop at the garage opening and I will jump out and Johnny will take over. Then I will work with Helio (Castroneves) to hopefully get his first win.”

It will be the ninth time a Camaro has paced the field and the 27th time for the Chevrolet badge.

Co-incidentally a Chevrolet Corvette was the first machine raced by Penske in 1966.

“I had a chance to drive an IndyCar in a test in the mid ‘60s but my boss didn’t let me have a couple of weeks off in those days.

“In February 1968 I became a Chevrolet dealer and part of the deal with Chevrolet was that I wouldn’t race because they didn’t want to have a dealer being a racer.

“Then Mario Andretti took the test and became very successful so I think both of us took the right direction back then.”