The crowd on Carb Day

As the countdown to the 100th running of the Indianapolis 500 continues, stories have thrived throughout Gasoline Alley.

A collection of snippets has been compiled by Speedcafe.com in the lead-up to the historic running at The Brickyard. 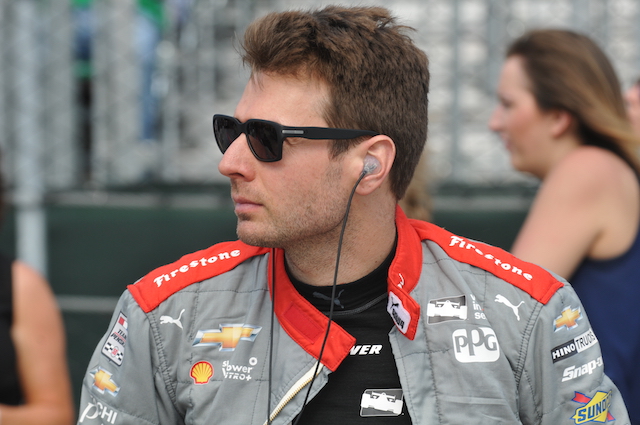 Will Power’s Indy initiation: The first experience Team Penske driver Will Power had at the Indianapolis Motor Speedway was driving a rent-a-car to the venue in 2005 and going for a lap in a bus.

Power had just signed a deal to drive for newly formed Champ Car squad Team Australia that was run by Derrick Walker but which did not field an entry in the 500.

“I was sitting around the hotel doing nothing. So I got a rent-a-car and drove to the speedway and went to the museum and watched that little film on the history,” Power told Speedcafe.com.

“I then got a paper ticket to get on the bus and do a lap of the circuit. That was my first time at the speedway.

“Then in 2006 I just bought a general admission ticket and sat in the stands between Turn 1 and 2.

“I got the appreciation of the crowd in 2008 when I made my Indy 500 debut for KV Racing and walked out of Gasoline Alley.

“You see a grandstand in front but then you look around and see it is full either end.

The expected 300,000-plus crowd tomorrow will be more than three times the population of Power’s birthplace, Toowoomba, west of Brisbane. 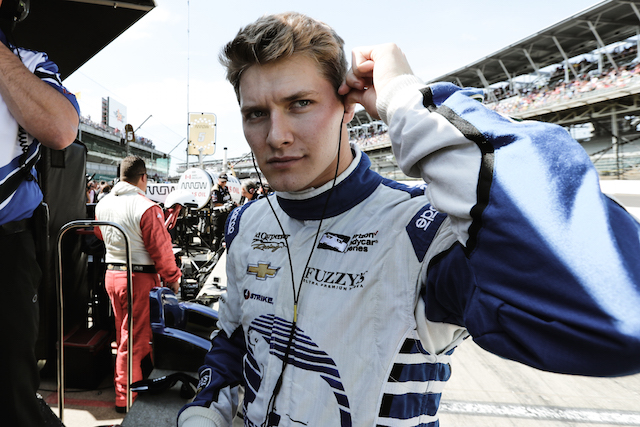 Done up in heavy make-up that included a pronounced nose, Newgarden pretended to be a reporter, albeit from an era long past.

‘Ted Crasnick’ posed as a reporter for a myriad of outlets including the Boca Raton Senior Society, ProstateHealth.com and RVWorld.com.

The pranks where he interviewed many of the 33 drivers including his team boss and fellow racer Ed Carpenter and Graham Rahal will feature on a pre-race show.

Aussie Will Power was worded up that there might be something brewing and didn’t fall for Newgarden’s stunt however Rahal was caught out by the prank.

When he approached Oriol Servia, Crasnick said: “Oreo, good to meet you. You’re named after a cookie, I understand. Oreo, I love that name, it’s so sweet.”

And then this: “Oh my gosh I think Ed (Carpenter) was my best interview. I spent the most time with him and he didn’t know it was me and that made it great,” Newgarden said.

“Rahal was good and I think he was getting a little flustered which I liked. Helio (Castroneves) lost his words at one point. I started asking him about prostate health and being inside the car. I’ve never seen Helio not been able to say anything.

“Juan (Montoya) was funny because he was so defensive in everything I said. That’s him. I accused him of being from Columbia, Missouri, which he rolled with. I asked him if he farmed potatoes and he said yeah. I said you look like a potato and I don’t think he liked that.” 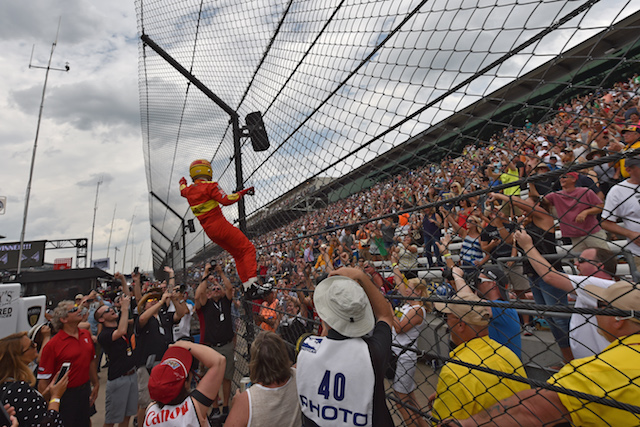 The Brazilian launched himself into his customary fence-climbing antics which has been his trademark at The Brickyard.

A fourth Indy 500 title beckons for the veteran who is driving the ‘Yellow Submarine’.

It was the 16th time, Team Penske has won the Challenge, nine of them by Castroneves.

The Pirtek Team Murray #61 crew had the massive crowd pumping when the seven pit workers flew the Stars & Stripes flags as they rolled down pitlane.

The crew was made up of military veterans including Navy SEALS and first responders which was backed by Warner Bros Home Entertainment.

Driven by dual Australian-American citizen Matt Brabham, the crew were an early exit from the annual Carb Day competition.

“I was trying to find some clean air in pack running there.

“Got a little too low on the inside. Dropped the ball and gave them some work to do overnight. The good news is the damage wasn’t too bad.

“Hopefully it’s the right rear corner, rear attenuator, rear wing and that’s all we have to fix.”

Buddy Lazier (#4 Lazier/Burns Racing Chevrolet): “We’re glad that this was Carb Day, because we certainly wouldn’t want this to have happened on race day.

“After rebuilding the car, running here today we had a front wing issue. An adjuster on the front wings failed. Whatever angle was set in the pits, out on the racetrack the wing wouldn’t hold. So, we have zero data from this run.”

Tony Kanaan (#10 NTT Data Chevrolet): “Obviously I have to pass 17 people before I get really happy with my car.

“But, you know, after the struggle in qualifying, we really focused, me and Dixon, on the race and I think you can see both of us up there.”

Will Power (#12 Verizon Team Penske Chevrolet): “Final practice went well today and the Verizon Chevy did really well in traffic. We made a couple changes and I think we felt good in the end.

“Hopefully the weather conditions will work in our favor on Sunday, but I’m really excited about the race.”

Graham Rahal (#15 Steak ‘n Shake Honda): “We ran through some of our race sets of tyres to try to check for vibration which is something we struggled with this week.

“We were building vibrations over the run. This is the best race car I have ever had going into the Indy 500.”

Jack Hawksworth (#41 ABC Supply AJ Foyt Racing Honda): “The car was not as strong as it was on Monday. I was very happy with it on Monday in terms of balance.

“I think we need to take a step back to look at why it changed and go back to that happy place.”

Matt Brabham (#61 PIRTEK Team Murray Chevrolet): “I was just getting comfortable in the car and trying a few things and avoiding crashes basically.

“The weather should be similar come race day. We got a really good read on everything. So I will go back with the Pirtek Team Murray crew, work through the data and everything else and have it sorted out for the race.” 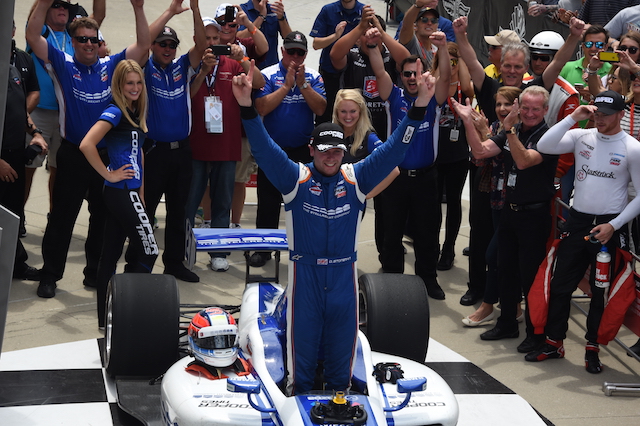 Stoneman prevails in tight finish: Cancer survivor Dean Stoneman claimed the Freedom 100 Indy Lights race by skinniest of margins in the history of the race.

The winning margin beat the previous photo finish from 2013 by two ten-thousands of a second.

The Mexican has taken his winning tally to six out of the seven races this season, taking the 90-lapper on the short oval from Juncos Racing pair Canadian Garett Grist and Argentinian Nicolas Dapero.

Another Juncos driver, Australian Jake Parsons slipped into fourth ahead of Aaron Telitz (Team Pelfrey) and Will Owen (Juncos).

The close encounter saw O’Ward and Grist never more than a few car lengths apart with the winning margin a mere .41s.

O’Ward has moved to 221 points over team-mate Telitz (166) with the series moving to Road America at Elkhart Lake from June 25-26.