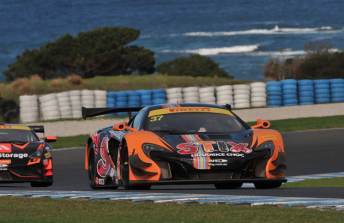 Shane van Gisbergen and Klark Quinn will start the opening round of the Australian GT Endurance Championship from pole position at Phillip Island.

The pair combined to secure the top spot as average times calculated from the best laps posted by each driver in the two 20 minute qualifying sessions set the grid.

Klark Quinn clocked the fourth fastest time in Q1 before V8 Supercars ace van Gisbergen chalked up a 1:26.637s to top the second session with the quickest time of the weekend.

Haber was third fastest in Q1 while Spengler posted a time good enough for seventh in the final qualifying session.

The Tony Quinn/Daniel Gaunt Aston Martin was fifth ahead of the #2 Jamec Pem Audi of Garth Tander and Steve McLaughlan.

The field has undergone a couple of changes overnight with Nick Percat now joined by 15-year-old Alex Rullo in the #62 Lucas Dumbrell Motorsport Lamborghini.

Alex Rullo replaces his father Peter, who piloted the car in both of Saturday’s races.

The duo will start from seventh on the grid despite Percat suffering a spin in Q2.

Mark Griffith will compete in today’s endurance race after securing a Mercedes SLS AMG GT3 to replace his damaged AMG GT3 entry, which was ruled out of Saturday’s two sprint races.

Griffith will partnered by V8 Utes champion Ryal Harris and will start from 21st on the grid.