Brazilian veteran Tony Kanaan has topped the field in final practice ahead of the 100th running of the Indianapolis 500.

“We don’t need to save engines on Carb Day any more. This is the closest we get to the race and we had almost five days without any running,” Kanaan, the 2013 winner, said.

“It was a race out there today that’s for sure.”

IndyCar teams took advantage of the hot conditions to hone their race simulations in a busy session that saw a heavy amount of laps logged by the entire field in front of a heavy crowd.

The session saw a red flag 15 minutes from the finish of the 60-minute run when Pippa Mann collected the wall at Turn 4 with her Dale Coyne Honda suffering extensive damage.

Mann lost aero while running in a pack, striking the wall with the rear of the machine.

Pirtek Team Murray driver Matt Brabham clocked 45 laps ahead of finishing 32nd of the 33 runners and had a birdseye view of Mann’s crash.

“I was just getting comfortable in the car and trying a few things and avoiding crashes basically,” Brabham said.

“It was a tight one out there with Pippa she was right in front of me when she went off, so that was a bit interesting.

“Everyone was checking up and I was getting used to how it was. Speeding up and working on racecraft ahead of Sunday.” 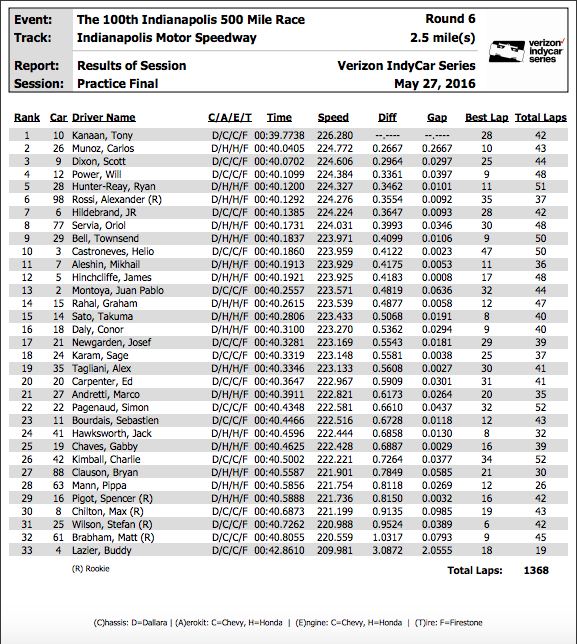