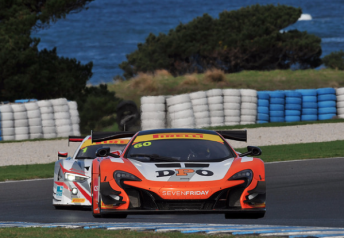 Nathan Morcom produced an impressive drive from the back of the grid to win the opening Australian GT Championship race at Phillip Island.

The McLaren driver managed to scythe his way through the field having been forced to start from 27th following an exclusion from qualifying when officials deemed his 650S GT3 to be underweight.

Morcom wasted little time in the race climbing to 10th when the pit stop window opened shortly after a Safety Car period caused by Peter Rullo’s stranded Lamborghini on lap 15.

When racing resumed Morcom stormed from seventh to third before chasing down and then passing Yasser Shahin (Lamborghini) and Tony Walls (McLaren).

Once in front Morcom eased to victory taking the chequered flag from Yasser Shahin, who started from 23rd spot.

The South Australian was 16th at the time of the pit stops but emerged in second once he returned from the pit lane.

A charging drive from Shane van Gisbergen in the second half of the race saw him claim the final place on the podium.

The Kiwi took over the car outside of the top 10 from Klark Quinn, who ran in the top three before the pit stops.

Tony Walls, who led for a spell after the pits stops, brought his Objective Racing McLaren 650S home in fifth ahead of the Dean Canto/Andrew Taplin Lamborghini.

The BMW M6 GT3 of Steven Richards and Max Twigg completed the top 10.

The race began with pole-sitter Garth Tander leading the early laps in the #2 Jamec Pem Racing Audi R8 before a puncture hit on lap 10 with the Holden Racing Team star holding a lead of more than two seconds.

This handed Nathan Antunes the lead in the Tekno McLaren from Marco Bonanomi.

Antunes appeared to be in the box seat to take out the race but a decision to pit a lap after the Safety Car was recalled proved pivotal, dropping him to 21st position.

Jamec Pem Racing’s sister entry of Miguel Molina and Tony Bates encountered a difficult race after being hit with a drive-through penalty for an unsafe release.

The car then suffered a left rear puncture later in the race which demoted him to 28th position.

It proved to be a challenging day for the Audi runners with the Supabarn Supermarkets entry of Marcus Marshall/James Koundouris picking up a puncture with three minutes of the race remaining.